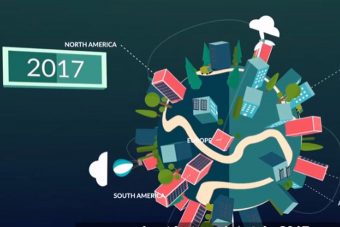 In the wake of President Trump’s decision to pull the U.S. out of the Paris Accords, many American mayors promised to work with sister cities across the globe to continue to battle climate change. Pledges have been made, but what will concrete plans look like?

A new initiative between French startups and C40 Cities, a global coalition of cities battling climate change, believes they have part of the answer. Beginning this fall, DataCity, a platform developed in a French startup incubator, NUMA, will expand internationally. By pooling information, new ideas, and smart city strategies across the globe, organizers hope to build a network for collective action between city leaders and high-tech innovators, and provide means for taking action.

A Paris-based accelerator with hubs in eight different cities including New York and Bangalore, India, NUMA focuses on global challenges, including climate change and transportation. It’s built on the idea that early collaboration fields more usable results: government officials, corporations, and entrepreneurs meet to define and scope problems before devising solutions and potential ideas, hoping to encourage the kinds of cross-disciplinary exchanges that weed out impractical ideas before anyone expands development resources. When representatives from Paris government and French utilities can meet with developers and designers, for example, they can formulate solutions grounded in real-world issues that will be developed with a more intimate knowledge of data, existing systems, and infrastructure. 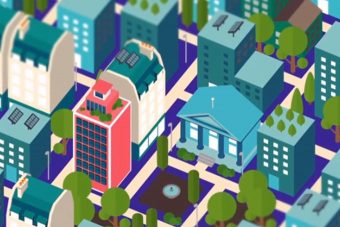 DataCity represents this kind of holistic thinking. The NUMA incubator brings together partners, as well as public and private data sets, to inspire startups, analyze performance, and help develop tools to make cities more green and efficient. For instance, last year, a DataCity startup working with SFR, a French mobile provider, analyzed usage patterns in specific Paris neighborhood to adjust municipal lighting systems, determining low-traffic periods when street lamps could be dimmed without the need for installing expensive new sensors. The concept cut energy usage by up to 10 percent in tests.

The intelligent lighting concept was one of 10 ideas devised during last year’s DataCity program, says Fischer, including an analysis of tourist bus traffic and a text-based trash collection system that sent SMS warnings to building managers when pickups trucks were on their way. That program, if applied to the city of Paris, could reduce the number of bins on city streets by 46 percent, Fischer estimates. With this international expansion of the DataCity program, promoters believe similar shared solutions could make a sizable impacts globally.

Promoters and organizers envision a network of DataCity programs becoming a clearinghouse for strategies for efficiency and reducing energy use, and platform for sharing ideas, data, and success. Final cities haven’t been decided for the fall expansion yet, but New York City is a possibility. And according to Margaux Salmon-Genel, the DataCity World Program Manager, the network hopes to expand to 40 cities across the globe by 2018, and create an “international platform of city collaboration, to learn from each others challenges.”