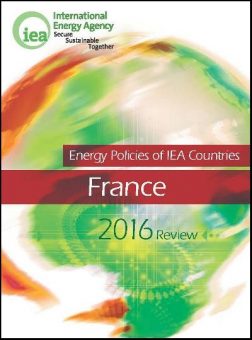 The International Energy Agency (IEA) praised France for setting in motion significant reforms towards more secure, affordable and sustainable energy supplies and the green growth of its economy.

Over the past ten years the French economy has reduced its carbon intensity and benefitted from greater energy efficiency, notably in the residential sector, according to the IEA report, Energy Policies of IEA Countries: France 2016 Review. The IEA praised France’s leadership role in climate change mitigation and green finance around the world and at home, particularly thanks to the adoption of the ambitious set of measures under the Energy Transition for Green Growth Act in 2015.

But the IEA found that the government’s plan to cut the share of nuclear power from 78% of electricity produced today to 50% by 2025, while also reducing greenhouse gas emissions by 40% in 2030, will require significant investments in energy efficiency and new low-carbon generation.

“France has to implement nothing less than a transformation of its energy system and power market,” said Paul Simons, the IEA Deputy Executive Director, speaking at the launch of the report in Paris. “France’s Transition Act is a first-class energy and climate framework, based on a low-carbon strategy, carbon budgets, and the related investment planning. France leads on carbon pricing with a long-term carbon price trajectory set by law up to 2030.”