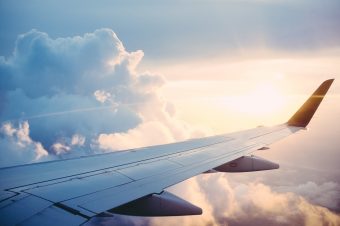 A new ‘eco tax’ will raise money for less polluting modes of transportation.

France announced on 9th July that it will introduce an ‘eco tax’ on all flights originating within the country. The amount will range from 1.5 euros (US$1.70) to 18 euros (US$20), depending on the ticket type and destination, and is hoped to raise over 180 million euros annually. This money would be used to develop less polluting modes of travel, such as trains.

There have been mixed reactions to the tax. Air France says it “strongly disapproves,” and predicts losses of up to $67 million per year, to which the transport minister said there would be “no disadvantages for French airline companies.” The Washington Post reported that, following the announcement, Air France’s stock price tumbled by three percent.

Environmental campaigners are cautiously supportive, as they understand that the airline industry cannot continue business as usual in the face of climate change. Andrew Murphy, an air travel expert for a Brussels-based group called Transport and Environment, told the Associated Press, “This alone won’t do much, but it’s at least a recognition by the French government that more is required.”

France’s tax is considerably less than the one implemented by Britain, where the lowest passenger tax is $16.20 and the highest $560. Sweden, Germany, and Italy have also implemented similar taxes. Meanwhile, the Netherlands is lobbying the European Union to introduce a continent-wide aviation tax that would prevent airlines from changing to routes to avoid taxes.

There appears to be more support for an airline tax than for President Emanuel Macron’s diesel fuel tax that sparked the violent ‘yellow vest’ protests across France last winter and caused millions of euros of damage. That tax was eventually abandoned.

But taxes do work, and most people understand that they play an important role. As the State Secretary for Finance Menno Snel told the Washington Post earlier this year,

“If you can choose between taxing the income of people or pollution and CO2, it makes more sense to try and find a tax base on the second than on the first.”

Raising the cost of flights is a smart strategy – not to the point that they become accessible only to the wealthy, but enough to discourage the long-weekend getaways that have become so common. If flights were 50 percent more expensive, for example, people would think twice before hopping on a plane for a single night and be more inclined to plan ahead and go for longer. Whether this price hike takes the form of an eco-tax or a frequent flier’s tax (anyone flying more than once per year) doesn’t really matter; the point is to force people to stop assuming they can and should fly anywhere, anytime.