France plans to launch a major endeavor to triple the amount of cyclists on its streets within the next seven years. The action will include building better bike lanes, providing financial incentives for commuters to switch to bicycle transportation and cracking down on bike theft. The plan was announced by the French Prime Minister Edouard Philippe at a speech in Nantes, where he revealed that cycling accounts for only 3 percent of transportation in the country. 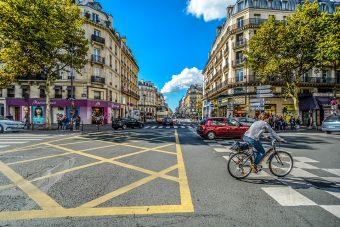 Despite hosting the acclaimed Tour de France competition, France has fallen far behind other EU nations in bicycle transportation. In the Netherlands, cycling accounts for almost a third of all transportation, backed by a strong cycling culture as well as organized routes and laws that make Dutch riders feel safe on the roads. “Fifty million euros per year will not turn France into the Netherlands, but it is a start,” said Olivier Schneider, head of the French Bike Users Federation (FUB).

France’s total fund for cycling infrastructure over the next seven years amounts to 350 million euros ($410 million). “We plan to triple the share of cycling to 9 percent by 2024, when we host the Olympics,” Philippe said. “The discontinuity on the bike lane maps creates insecurity and discourages people from cycling.” Currently, bike lanes in French cities only run short distances and are not safely connected to one another at major intersections or heavy traffic zones.

In addition to addressing these incomplete routes, the government will restructure one-way streets to include two-way bike routes, saving commuters inconvenience and time. Converters to cycling will be rewarded yearly with 200 euro ($233) tax-free stipends from the French government, and many private companies are looking to double that amount, providing their own 400 ($467) euro tax-free rewards each year for commuters. Companies are also being mandated by the government to allocate proper bicycle parking facilities for their employees, a feature that train hubs around the country will also boast. To deter bike thieves from suspending the country’s progress, new bikes will be subject to a mandatory identification engraving system, which will make it easier for burglars to be apprehended and fined.

The French government will also introduce cycling lessons in all secondary schools by 2022 to ensure that future generations embrace the cycling culture and respect for a clean environment.