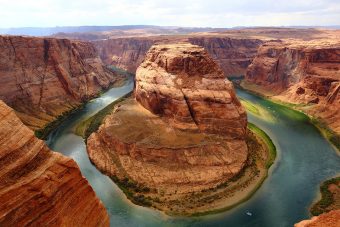 Water means different things to different people. For some, it nourishes livelihoods and drives local economies and for others it’s a source of recreation and reflection. Water is valued for a variety of reasons, but the common thread throughout is that it is essential for all life on Earth.

All water sources are precious, and rivers are no exception. In fact, an estimated 2 billion people around the world rely directly on rivers for their drinking water and fisheries from inland waters provide livelihoods for approximately 60 million.

Beyond the value they provide for humans, with the river flows nutrients and sediments that sustain incredible biodiversity. Those rivers that are free-flowing are the freshwater equivalent to wilderness areas but sadly over two-thirds of rivers are impeded by dams and deltas are disappearing due to lack of sediment.

This World Water Day, we’re celebrating 4 rivers and wetlands that we love, and cannot afford to lose.

Flowing for nearly 3.000 miles from the Tibetan Plateau through six different countries all the way to the South China Sea, the Mekong River is the world’s 10th longest river. Not only does its basin host extraordinary wildlife, including the critically endangered Irrawaddy river dolphin, but it also hosts the largest and most productive freshwater fishery in the world. Supporting critical ecosystem goods and services for tens of millions of people, the catch from this fishery accounts for up to 25 percent of global freshwater catch.

But the development of additional river-fragmenting dams in the lower Mekong threatens the benefits that it still delivers. Poorly placed dams can have negative impacts on nature and people up and down-stream of a dam’s location. In this case, additional dams on the lower Mekong are anticipated to severely impact the fishery and the downstream Mekong Delta. In 2020. the Cambodian government took a proactive step in safeguarding the Mekong river and the communities and wildlife that depend on it by abandoning plans to build the Sambor hydropower dam and putting a 10-year moratorium on any new dams on the Mekong mainstem.

Not a river, but the world’s largest tropical wetland, the Pantanal spans over 42 million acres across three South American countries. Wetlands only cover 6 percent of the Earth’s land surface, but they are disappearing faster than forests.

But the Pantanal still stands as a spectacular wildlife refuge, home to iconic species such as jaguars and capybaras, and as a critical source of livelihoods for local communities and water for distant cities.

However, despite its significance, less than 5 percent of the Pantanal is currently protected; around 95 percent is under private ownership. In recent years, expansive development—roads, hydroelectric dams, large-scale mines, and cattle ranching, to name a few—has threatened the Pantanal and has begun to change the dynamics of the wetlands.

A shared resource brings shared benefits, and shared solutions are needed when problems arise. In 2018. Brazil, Bolivia, and Paraguay, the three countries that share this ecosystem, made a shared commitment to sustaining the Pantanal when they signed a landmark trilateral agreement known as the Pantanal Declaration. In this agreement, the three countries commit to work together to protect the Pantanal through efforts to reduce pollution, strengthen water governance, and expand scientific knowledge, while ensuring the rights of Indigenous Peoples.

The most biologically diverse place on Earth, the Amazon biome hosts four of the ten largest free-flowing rivers in the world, including the 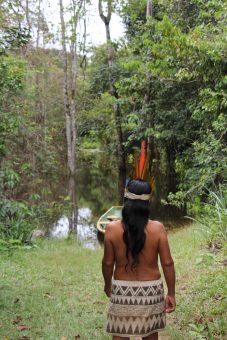 Amazon River, a close second to the Nile River as the world’s longest. With its hundreds of tributaries and streams, the Amazon River flows for more than 4.000 miles across 10 South American countries, supporting the more than 30 million people living in the region who depend on its resources.

The Amazon River contains the largest number of freshwater fish species in the world—more than 3.000 with more being discovered every

year—but fish aren’t the only residents of this natural wonder. The Amazon river dolphin is characterized by its pale pink color and acts as a great indicator of overall river health. The healthier the population of dolphins, the healthier the river ecosystem. But when that population is in decline, it’s an indication of a problem for much more than just the dolphins.

The Amazon River is under threat from hydropower dams that block migration, and from mercury pollution from gold mining, a threat to fish, dolphins, and people. WWF works with governments to advocate for a basin-wide approach to hydropower planning that identifies the rivers with the highest conservation value so that development can be steered away from them.

The natural ebbs and flows of the Luangwa River in Southern Africa provide much more than drinking water for the communities and wildlife that depend on it. Simon Mwanza, a farmer who lives with his family along the riverbank, has synced his crop rotation with the seasonal rhythms of the river. The rainy season brings high tides that flood Mwanza’s gardens, leaving behind rich nutrients that fertilize the soil and feed his crops. And when the river retreats, it leaves behind temporary watering holes that draw wildlife—lions, elephants, hippos, and more—that in turn draw tourists, supporting the local economy.

In 2019. following a campaign run by local communities and conservationists, the Zambian government announced its decision to halt plans to construct a hydropower dam across the Luangwa, keeping the river free-flowing. This is a win for both people and nature, but the Luangwa river basin still faces other threats—including deforestation for charcoal—so there is still work for us to do to safeguard this extraordinary river.

Join our Freshwater Force today to find out how you can help safeguard these vital rivers and wetlands.