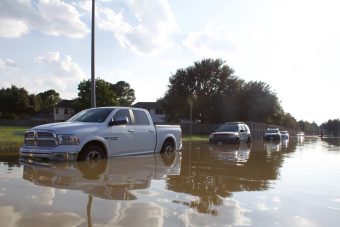 Nearly two thirds of British adults accept climate change is happening and is primarily due to human activity, according to a major new poll that detects a “discernible shift” in the public’s engagement with climate-related risks.

The ComRes survey of 2,045 British adults found 64 per cent say climate change is happening, and is primarily due to human activity, representing a sizeable increase on the 57 per cent who accepted man-made climate change was occurring in a 2014 survey.

“Over just three years there has been a discernible shift in public opinion towards acceptance that climate change is both happening and mainly caused by human activity,” said Andrew Hawkins, chairman of ComRes.

“Seven in 10 now believe that almost all, or a majority, of climate scientists believe the same.”

He added that the acceptance of climate change science was feeding in to the public’s stance on a number of environmental policy issues. “The significance of this is that the public are becoming increasingly willing to see polluting energy sources phased out, to adopt alternative technologies and accept public policy changes to shift behaviour,” he said.

A raft of recent polling has revealed overwhelming majority support for renewables and a desire to see UK environmental policies protected post-Brexit.

The latest poll, which was commissioned by the Energy and Climate Intelligence Unit think tank, also revealed the climate-related risks which spark the most concern amongst the public.

Professor Joanna Haigh, co-director of the Grantham Institute at Imperial College London, welcomed the evidence that understanding of climate change is growing. “For people who have worked on climate change for decades, the finding that people recognise the sheer weight of scientific evidence is extremely heartening,” she said.

“But as the climate system sends increasingly urgent signals of the stress it is coming under, this understanding must be turned into action to address to the problem. We have the means to avoid the very worst impacts of climate change, and create a cleaner, healthier society – all it takes is the will.”