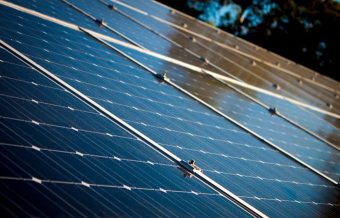 Flat Holm island is an uninhabited rocky outcropping in the Bristol Channel that separates England from Wales. It is much admired for its rugged beauty and abundant avian population but like many islands in the world, a diesel generator is its only source of electricity. Somehow the melding of diesel fumes with the cries of the birds just doesn’t seem right to Cardiff Council, which has jurisdiction over the island. Various schemes have been considered to bring clean, renewable power to the island, including hydroelectric power and a permanent installation of conventional solar panels.

Gareth Harcombe, energy and sustainability manager for the council, says the hope was to find a portable option, one that could be removed if needed and reused elsewhere. Enter Renovagen, a UK startup founded 5 years ago by John Hingley. His company’s Rapid Roll Solar PV system can be unrolled like a carpet from a trailer and begin working immediately. One small panel can provide 11 kilowatts of power in just two minutes. A more extensive version, unrolled from a shipping container, can yield 300 kilowatts of electricity in less than an hour.

In addition to being easy to deploy, the rollup panels cost less to transport than ordinary solar panels. “Compared with traditional rigid panels, we can fit up to 10 times the power in this size container,” Hingley says. Since the Renovagen system was unrolled and placed in service in early October, it has successfully provided power to the lighthouse on the island and its one commercial enterprise, the Gull and Leek pub. The council also plans to use the system to recharge to the two Nissan e-NV200 electric vans it has in its fleet.

Hingley is hoping the exposure the Rapid Roll system gets from being used on Flat Holm island will tempt others to try it, especially since it is ideal in terms of cost and efficiency for use following any natural disaster that interrupts the electrical supply. Puerto Rico, where most residents have been without electricity for almost two months is one place that comes to mind.