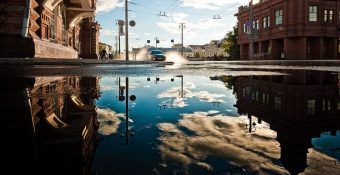 Flash floods cause more than 5,000 deaths worldwide annually, exceeding any other flood-related event.  They have enough power to change the course of rivers, bury houses in mud, and sweep away or destroy whatever is on their path.

They are among the world’s deadliest disasters and result in significant social, economic and environmental impacts. Accounting for approximately 85% of the flooding cases, flash floods also have the highest mortality rate.

In response to this need, the World Meteorological Organization, the U.S. National Weather Service, the Office of U.S. Foreign Disaster Assistance, and the Hydrologic Research Center formed a partnership in 2007 to develop and implement an early warning flash flood forecasting system (Flash Flood Guidance System – FFGS) for global application.

By the end of 2019, over 3 billion people in 67 countries are being provided early warnings of potential flash flooding through their National Meteorological and Hydrological Services working in concert with their National Disaster Management Agencies.

WMO has produced an animation explaining the challenges of flash floods and the benefits of the Flash Flood Guidance system as an important disaster management tool to save lives. This is now available in Arabic, French, Spanish and Russian.