Better management of fisheries and fishing rights around the world could increase profits and leave more fish in the sea as long as measures to meet climate obligations are taken, new research has found. 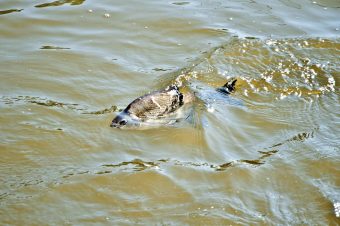 Even if temperatures rise by as much as 4C above pre-industrial levels – in the upper range of current forecasts – the damaging effects on fishing can be reduced through improving how stocks are fished and managed.

Governments are meeting from 4 September in New York for the first round of talks on a new global treaty of the high seas, which would aim to conserve overfished stocks and make access to key fisheries more equitable. Any agreement is likely to take several years to negotiateand longer to come into force, but scientists say there is no time to be lost, given the magnitude of the threat to the world’s marine ecosystems.

Climate change is already causing the movement of some species as their traditional habitats grow warmer, and overfishing is wreaking heavy damage on stocks. However, by adapting fisheries management to a warming climate, and instituting better systems such as monitoring of fleets, the global catch can be increased despite these factors, according to the paper published on Wednesday in the journal Science Advances.

“This is a positive message amid the doom and gloom,” said Kristin Kleisner, one of the authors of the study and a senior scientist at the US Environmental Defense Fund. “We can control how we manage our fisheries. We will have severe effects [from climate change] but this shows what we can do as humans to control that.”

If temperatures were to hit 4C above pre-industrial levels, but good management was put in place, there could still be an increase of 17% of the amount of fish in oceans, compared with a decline of 5% of fish biomass if current practices continue and the world warmed by only 1C.

She noted that new technologies, such as monitoring of fishing vessels from satellites and through the internet, could make a big difference in enabling closer management. These techniques can also make fisheries management more responsive to the changing dynamics of ocean ecosystems, so that fishing can be redirected if stocks appear to be declining, for instance.

Under 2C of warming, improved management could yield even better returns, resulting in a 16% increase in the catch, amounting to 25bn servings of seafood a year, and nearly a third more fish in the sea than there are today. The finding is crucial because more than 1 billion people globally rely on fish, particularly key species such as tuna and mackerel, as their main source of protein.

Governments agreed in 2015 to take action to limit warming to no more than 2C, regarded as the threshold of safety beyond which the effects of climate change are likely to become catastrophic and irreversible.

Kleisner said the results of the study showed that governments should take prompt action to bring in modern fisheries management.

Global Fishing Watch, an international NGO, has used technological improvements to open up vast amounts of new data on fishing around the world. These include data made public earlier this year on tens of thousands of global vessels, which would have been impossible even five years ago.

Sarah Bladen, of Global Fishing Watch, said even newer techniques were being brought to bear, with results that could be “game-changing” for fisheries management and preventing illegal fishing. “Technological innovation is putting us within reach of a ‘real-time’ digital ocean. The open ocean has long been characterised as the wild west: lawless, remote and plagued by a paucity of data. However, our ability to directly detect and track fishing vessel activity globally is undergoing an extraordinary transformation.”

She called on the fishing industry to take note: “This really is, or needs to be, a wake-up call: the era of ‘secret’ fishing spots is over. To maintain the social licence to operate, fishing industries worldwide need to step up and accept, indeed embrace, levels of transparency in fishing activities that were unimaginable a decade ago.”

Prof Alex Rogers of Oxford University told the Guardian that international action and a global treaty must be brought in as soon as possible, before the current damage turns into a catastrophe. “The situation is very urgent. We need to bring our activities at sea to a sustainable level,” he said. “The status quo cannot be allowed to continue, if we want to preserve ocean health and have fish for tomorrow.”

The threats to ocean life include not only climate change, acidification and overfishing, but the pollution, including plastics and agricultural chemicals that we pour into the sea, and our industrial exploitation of the seabed, for instance for oil and gas exploration and mining. These activities have been enabled by new technology, which is not taken into account in current sea governance, which dates back to the 16th century, according to Rogers.

The governance of the high seas, which cover most of the oceans beyond national jurisdictions, had failed to keep up with this pace of change, he added: “These new activities can ramp up very quickly, and do tremendous damage in a very short time.”