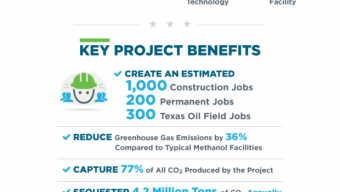 On the shortest day of 2016, the US Department of Energy announced that it has made the “first ever offer for a conditional commitment” of loan guarantees under its Advanced Fossil Energy project to Lake Charles Methanol, LLC, for a petcoke-to-methanol facility.

The Department of Energy’s (DOE) Loan Programs Office (LPO) offered up to $2 billion in loan guarantees to help finance the facility in Lake Charles, Louisiana, as announced on December 21st. The operation, which will not only be the first of its kind in the US, but will also be the first methanol facility in the world to use carbon capture technology, will then become “the world’s largest industrial manufacturing carbon capture facility.”

In the transition to a cleaner and more sustainable economy, helping to finance a fossil fuel methanol plant may not seem like an obvious choice for the DOE’s LPO, as the cleantech sector is more likely to cheer on the success of loan guarantees in the solar industry than in the fossil fuel sector. But seeing as these loan guarantees are coming under the aegis of the Advanced Fossil Energy program, it’s a total no-brainer, at least as far as the project qualifying under Section 1703 of Title XVII of the Energy Policy Act. The wording in the act gives the DOE authorization to issue loan guarantees for projects that “avoid, reduce or sequester air pollutants or anthropogenic emissions of greenhouse gases; and employ new or significantly improved technologies as compared to commercial technologies in service in the United States at the time the guarantee is issued.”

Petcoke certainly seems like a good fit for cleaning up, as it’s a byproduct of the petroleum refining industry, and one that is often exported to other countries, where it is burned instead of coal (and where it emits 5 to 10% more CO2 than coal on a per-unit-of-energy basis). According to the DOE, this petcoke-to-methanol facility is designed to emit 36% less greenhouse gases than typical methanol facilities (on a lifecycle basis), and will capture 77% of its carbon emissions, with an estimated annual sequestration of 4.2 million metric tons of carbon.

One of the other key reasons that the LPO made the conditional offer of loan guarantees to the project is that the DOE believes that carbon capture and storage technology “is on the cusp of commercial-scale deployment” and the loan guarantees “could play a role in helping to bridge the funding gap for CCUS so this technology is financed by private lenders in the future.”

It’s not quite ‘clean,’ but it’s cleaner than other methanol facility alternatives, and it certainly seems to fit under the ‘all of the above’ energy policy umbrella.

However, in an extremely ironic twist, the sequestered carbon captured by the lake Charles Methanol facility “will be transported via pipeline to southeast Texas for use in enhanced oil recovery (EOR).”

This initiative can give city trees a second life –...