Much of the current innovation in farming focuses on how to integrate technology into the food we produce by genetically engineering crops and livestock for improved production, increased resilience to disease, or better adaptability to weather-changing climate patterns. But a new development out of Australia doesn’t want to change what we farm — it wants to change how we farm. 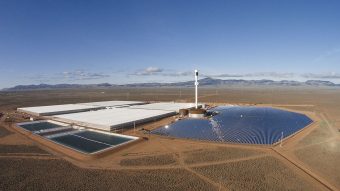 Sundrop Farms in South Australia is using a combination of solar power and seawater to produce food in the middle of a desert and completely independent of nonrenewable resources. Every day, seawater is pumped 2 km (1.24 miles) from the Spencer Gulf to the 20-hectare farm. The water is then run through a desalination system that produces up to 1 million liters of fresh water every day, which is then used to irrigate 18,000 tomato plants inside a greenhouse.

That desalination system is powered by solar energy. 23,000 mirrors focus sunlight onto a receiver tower 115 meters (377 feet) tall to produce up to 39 megawatts of energy per day. There is no need for pesticides since the plants are grown in coconut husks and seawater sterilizes the air. Herbicides are also unnecessary as the employees weed the plants by hand.

The whole process at Sundrop Farms is less about creating new technology and more about combining existing technologies in a new way, and while the farm’s system has been criticized as unnecessary by some since tomatoes can still be grown in non-desert parts of Australia, that may not be the case 20 or 50 years from now.

Right now, current farming practices cost the whole world some $3 trillion per year, according to Trucost. That cost is based on the environmental price of farming — land use, water pollution, deforestation, etc. — and it’s just going to keep climbing. Climate change is going to continue to eat at the resources we use for farming, and the expected increase in population by 2050 will result in a 50 percent increase in food demand. The pesticides that we currently use are also having a devastating effect on the environment that may soon become irreversible.

Those future projections make innovative, sustainable farming practices like those used by Sundrop Farms even more of a priority for combating hunger in the years to come.