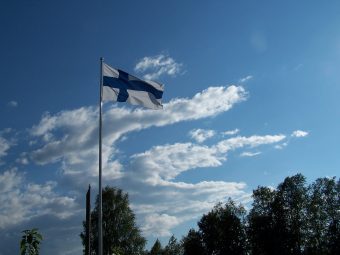 The Finnish government has announced plans to stop using coal, one of the the dirtiest fuels on the planet, by 2030.

“Finland is well positioned to be among the first countries in the world to enact a law to ban coal … This will be my proposal,” Minister of Economic Affairs Olli Rehn told Reuters.

This is all part of Finland’s ambitious target of cutting greenhouse gas emissions by at least 80 percent by 2050.

“Giving up coal is the only way to reach international climate goals,” Rehn added.

According to The Independent, the “Energy and Climate Strategy for 2030 and Beyond” is the country’s plan to phase out coal within 14 years. Finland aims to turn its energy production carbon-neutral by 2050 with plans to switch its traditional energy sources to biofuels and renewable energy.

The strategy will be presented to the Finnish parliament for approval in March.

Currently, Finland gets only 8 percent energy from coal, mostly imported from Russia. Renewable sources and nuclear make up 45 percent and 34 percent respectively.

Finland is not the only country trying to stamp out coal—other European countries as well as Canada have similar plans. The state of Oregon also wants to phase out the carbon-polluting fuel.

However, Finland’s plan appears to be much more strict. According to ZME Science, “In countries such as France or the UK where coal will be phased out, there will still be some leeway that will allow the trading the coal for instance. With a ban in place, not only will be Finnish utilities be barred from producing energy from coal, it will also be illegal to import electricity that is made from it—that’s an entirely radical approach, but one that has a lot of positive environmental implications.”

“Basically, coal would disappear from the Finnish market,” Peter Lund, a researcher at Aalto University, and chair of the energy program at the European Academies’ Science Advisory Council, told New Scientist.

Of course, not everyone in Finland is happy with the plan.

“The discussion about prohibiting the use of coal under law is inexplicable,” Jukka Leskelä, the managing director of Finnish Energy, told the Helsinki Times. “Such an effort would not succeed without offering substantial compensation [to energy producers]. I fail to understand how the central administration can spend so recklessly and be so unappreciative of the situation in the energy markets.”

Transport and Communications Minister Anne Berner also told the Associated Press that the emission targets for the transport sector is “demanding.”