Gland, Switzerland (IUCN) – By increasing the biodiversity of soils through sustainable practices, farmers could deliver substantial benefits for food and water security as well as climate change mitigation and adaptation, according to a new IUCN report published today. An annual increase of just 0.4% in the carbon content of agricultural soils, which is a key indicator of soil biodiversity, over the next 30 years could potentially boost global production of three major crops – maize, wheat and rice – by up to 23.4%, 22.9% and 41.9% per year respectively, according to the report. 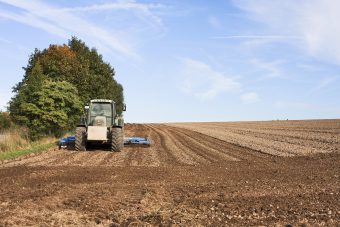 “The data in this report debunks the myth that nature conservation and global food production are a zero-sum game,” said Dr Bruno Oberle, IUCN Director General.“ Agriculture has often been portrayed as a threat to biodiversity conservation. Yet conserving living, biodiverse soils and landscapes can boost yields while helping both nature and society. This report clearly identifies common ground and joint aims for farmers and conservationists that can help secure the future of agriculture itself.”

The new report, Common Ground: Restoring Land Health for Sustainable Agriculture, for the first time quantifies the potential societal benefits and monetary value of a large-scale, global adoption of cost-effective sustainable farming methods that boost soil organic matter and biodiversity. These methods include agroforestry and conservation agriculture as well as the use of manure and mulching.

The potential yield increases for maize, wheat and rice are worth an estimated US$132 billion. As an additional benefit, the increased organic carbon content in agricultural soils worldwide would enhance their capacity to store water by up to 37 billion m3, reducing the need for irrigation by ca. 4% globally and potentially saving US$ 44 Billion per year, the report finds.

By sequestering carbon, biodiversity-rich soils also help mitigate global warming. The report estimates that the annual 0.4% increase in soil carbon content would translate into an additional 1GtC being sequestered per year on average. This represents 10% of global human-induced carbon emissions based on 2017 numbers. This contribution to climate change mitigation would save society an estimated 600 Billion US$ per year in present value terms over the 2020-2050 time horizon, according to the report.

“This report shows that by working together, farmers and conservationists can deliver long-term food, nutrition and water security to everyone. Healthy, living soils and landscapes can indeed increase the resilience of food production to the negative impacts of climate change, and can secure the access to safe and nutritious food, particularly for the most vulnerable people in developing countries”, said Ludovic Larbodière, Senior Expert for Agriculture and Environment with IUCN. “To achieve this vision, we must stop thinking of agriculture purely in terms of food, fibre, and fuel, and instead incentivise and reward these additional services farmers provide to society.”

The calculations in the new IUCN report are based on an assumed annual increase of agricultural soil carbon content of 0.4% between 2020 and 2050. This increase was set as a target by the 4 per 1000 initiative, launched by the French government in 2015. According to a recent study, this target is attainable through a large-scale adoption of sustainable practices.