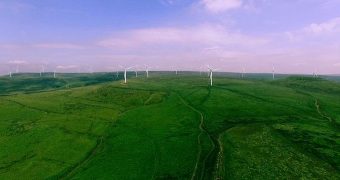 Enel Green Power North America announced on Monday that it had signed two Power Purchase Agreements with Facebook and Adobe for the electricity generated from its soon-to-be-completed 320 megawatt Rattlesnake Creek wind farm in Nebraska.

Construction of the Rattlesnake Creek wind farm began in November of 2017 by Enel Green Power North America, the US renewable energy subsidiary of Italian parent company Enel. At the time, Enel explained that it would be selling 200 megawatts (MW) of wind-generated electricity to Facebook to supply 100% of the needs of its new data center in Papillion, Nebraska, located about 120 miles from the Rattlesnake Creek wind project.

This week, however, the Facebook Power Purchase Agreement (PPA) was revised and expanded, and also included the involvement of computer software company Adobe.

Specifically, the PPA has been expanded to gradually include the entire output of the project by 2029 as Facebook looks to expand its data center in Papillion but ensure that the data center runs on 100% renewable electricity. In the interim, however, Adobe will acquire the power and renewable energy credits from a 10 MW portion of the project through a bundled PPA between 2019 and 2028.

“We are thrilled to partner with Facebook and Adobe on this wind project and to meet their individual energy needs through a customised solution,” said Antonio Cammisecra, Head of Enel’s Global Renewable Energies Division, Enel Green Power. “Agreements like these are a prime example of our ability to work collaboratively with corporate customers on tailor-made solutions, managing multiple off-takers with different energy supply volume needs.”

“Powering our data centers with 100% clean and renewable energy is not just a goal for Facebook, it is a requirement of our business,” added Bobby Hollis, Director of Global Energy at Facebook. “The Rattlesnake Creek wind farm will enable us to power our future Papillion Data Center, and fulfills our passion to expand the energy market for other corporate buyers, like Adobe.”

“We’re excited to reach the next milestone in our sustainability goals through this agreement with Enel and Facebook,” said Vince Digneo, sustainability strategist, Adobe. “Collaboration is everything and we believe that PPA partnerships like this one are the way forward. Grid-scale renewable energy purchases are a key part of meeting our Science Based Targets and are critically important in decarbonising U.S. grids.”