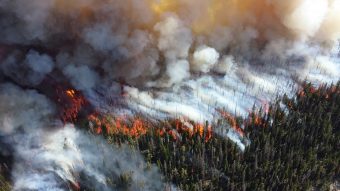 Exclusive: Prof Michael Mann declares the impacts of global warming are now ‘playing out in real-time’

The extreme heatwaves and wildfires wreaking havoc around the globe are “the face of climate change,” one of the world’s leading climate scientists has declared, with the impacts of  now “playing out in real time.”
Climate change has long been predicted to increase extreme weather incidents, and scientists are now confident these predictions are coming true. Scientists say the global warming has contributed to the scorching temperatures that have baked the UK and northern Europe for weeks.
The hot spell was made more than twice as likely by climate change, a new analysis found, demonstrating an “unambiguous” link.

Extreme weather has struck across Europe, from the Arctic Circle to Greece, and across the world, from North America to Japan. “This is the face of climate change,” said Prof Michael Mann, at Penn State University, and one the world’s most eminent climate scientists. “We literally would not have seen these extremes in the absence of climate change.”
“The impacts of climate change are no longer subtle,” he told the Guardian. “We are seeing them play out in real time and what is happening this summer is a perfect example of that.”
“We are seeing our predictions come true,” he said. “As a scientist that is reassuring, but as a citizen of planet Earth, it is very distressing to see that as it means we have not taken the necessary action.”

The rapid scientific assessment of the northern European heatwave was done by Geert Jan van Oldenborgh, at the Royal Netherlands Meteorological Institute and also colleagues in the World Weather Attribution (WWA) consortium. “We can see the fingerprints of climate change on local extremes,” he said.
The current heatwave has been caused by an extraordinary stalling of the jet stream wind, which usually funnels cool Atlantic weather over the continent. This has left hot, dry air in place for two months – far longer than usual. The stalling of the northern hemisphere jet stream is being increasingly firmly linked to global warming, in particular to the rapid heating of the Arctic and resulting loss of sea ice.

Prof Mann said that asking if climate change “causes” specific events is the wrong question: “The relevant question is: ‘Is climate change impacting these events and making them more extreme?’, and we can say with great confidence that it is.”

Mann points out that the link between smoking tobacco and lung cancer is a statistical one, which does not prove every cancer was caused by smoking, but epidemiologists know that smoking greatly increases the risk. “That is enough to say that, for all practical purposes, there is a causal connection between smoking cigarettes and lung cancer and it is the same with climate change,” Mann said.

Other senior scientists agree the link is clear. Serious climate change is “unfolding before our eyes”, said Prof Rowan Sutton, at the University of Reading. “No one should be in the slightest surprised that we are seeing very serious heatwaves and associated impacts in many parts of the world.”

It is not too late to make the significant cuts needed in greenhouse gas emissions, said Mann, because the impacts progressively worsen as global warming increases.
“It is not going off a cliff, it is like walking out into a minefield,” he said. “So the argument it is too late to do something would be like saying: ‘I’m just going to keep walking’. That would be absurd – you reverse course and get off that minefield as quick as you can. It is really a question of how bad it is going to get.”