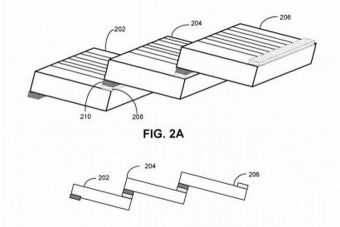 How SolarCity’s concept of overlapping solar cells connected by a conductive paste might help Tesla hit its cost and performance targets.

One of the biggest questions facing Tesla’s new Solar Roof product is how it will overcome the technical and cost-effectiveness challenges that have prevented other building-integrated photovoltaic contenders from breaking into the rooftop solar market.

This week, Tesla was granted a patent that could help answer some of those questions. The patent, first reported by CB Insights, is for a “method for curing conductive paste applied to two adjacent photovoltaic structures” — i.e., solar cells arranged in a “cascading” or overlapping structure, just like Tesla’s Solar Roof.

While it’s not clear if Tesla is using the methods described in the patent for its current Solar Roof production, the concept has been kicking around for some time. The patent application was first filed by SolarCity in May 2016, six months before its $2.6 billion acquisition by Tesla.

It’s also a much different approach than the standing-seam metal roof developed by SolarCity’s R&D unit, code-named “Steel Pulse,” that Tesla CEO Elon Musk reportedly called a “piece of ****” when he first saw it last spring. Tesla abandoned that project and switched to overlapping solar tiles, a product that was unveiled to the public in October — although that demo wasn’t actually wired up to generate electricity.

Tesla started taking orders in May, and announced the first working installations in August, with Musk and Tesla CTO JB Straubel getting the first ones. It also started releasing pricing data, with an average price of $21.85 per square foot, which is cost-competitive with standard tile or slate roofing products, but still more expensive than today’s solar panels on a cost-per-watt basis.

Tiled solar panels also face a core challenge — getting electricity to flow from one tile to the next efficiently, while protecting against rain, wind, heat and the other rooftop conditions that can erode a system’s performance over time.

The problem with convection ovens is that “the heating efficiency of such approaches is typically low, because most of the heat may escape to the environment,” the patent states. What’s more, “air must be circulated to ensure that there is effective and even convection occurring on the strips,” and “an uneven airflow can result in temperature non-uniformity on the strips.”

Heating surfaces provide more uniformity, but because they need to be cool before the solar cells are placed on them, “heating up and cooling down can take a long time, thus reducing the throughput of the fabrication system,” it noted. “In addition, heating and cooling of a large thermal mass can consume a large amount of energy, and can cause large thermal stresses to be applied to the tool.”

Tesla’s patent describes the two main parts of the system — the carrier of the solar wafers that runs underneath, and the heating element that sits above. The wafer carrier includes polybenzimidazole (PBI) plastic, a kind of plastic with very low thermal conductivity, to “ensure that the heat emitted from the heater is mostly trapped between the heater and the substrate carrier and, thus, can efficiently cure the conductive paste.” It also includes a “number of components separated by air gaps to allow an individual component to expand when heated.”

The heating element that sits above the conveyor belt also has a number of features, including a “radiation block” with “a substantially dark colored coating” to improve its efficiency, that “can include an anodizing coating or a high-emissivity coating,” with a thickness of between 1 and 100 microns.

“A well-designed system that can efficiently heat the strips without damaging the photovoltaic junctions can reduce the time needed for curing the conductive paste to a period between 25 and 60 seconds,” the patent notes.

By the way, Tesla’s tempered glass solar shingles are using a hybrid of technology from Panasonic and Silevo, which SolarCity bought for $200 million in 2014. That is not the same technology as most of the building-integrated photovoltaic (BIPV) products we’ve seen come and go over the past decade or so, which have used lower-efficiency thin-film solar materials that have been unable to compete with polysilicon solar panels.

Energy Conversion Devices went bankrupt chasing the dream of flexible BIPV through its Uni-Solar subsidiary. Even Dow Chemical wasn’t able to make a go with its Powerhouse line of roof shingles with built-in thin-film PV — it discontinued the product last year.