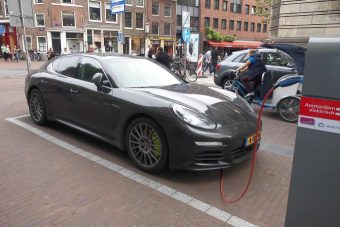 The largest operator of public fast-charging stations for electric vehicles, EVgo, has just opened its 1,000th DC charging station in the US, according to an email sent to CleanTechnica.

The 1,000th EVgo station — officially opened in partnership with Nissan North America — is located in Falls Church, Virginia, outside of Washington DC, at a new apartment community dubbed The Loren (developed by The Bozzuto Group).

The new site was selected owing to a recent EVgo study, which found that the metro area neighboring Falls Church was one of the top cities for EVgo DC fast charging utilization in the US — with a rank of 8th amongst cities, and an average of 96,600 miles charged per month.

An email sent to CleanTechnica provides more: “The Loren apartment complex is located along Arlington Boulevard, which allows for easy access to Washington, DC, making the location perfect for commuters and students to charge up quickly on their way to and from the nation’s capital. Additionally, the DC Fast Chargers are an important feature for EV owners who live in the apartment complex, as they might not otherwise have such convenient access to a charging option of this speed.

“… The Falls Church station includes two DC Fast Chargers. Each of the chargers is capable of delivering up to 50 kW of charge, which provides 80% state of charge in 30 minutes for most electric vehicles, equivalent to about 150 miles of range per hour.”

What that means effectively is that users will be able to fully charge the new 2018 Nissan LEAF in just an hour or so — not a bad deal for those living in the area, though perhaps still a bit long to wait for a full charge if you are on a long road trip. Obviously, though, most electric vehicle owners generally charge at home, overnight (which is obviously very convenient), rather than relying full time on networks such as EVgo’s — so the speed is almost entirely an issue for those making long-distance trips than it is for those commuting and/or running errands.

The email provides a bit more information on the EVgo system: “EVgo utilizes a variety of flexible charging solutions including pay-as-you-go, low-cost membership charging plans and unlimited charging plans for customers of partner OEMs, including Nissan, BMW, and Ford. Additionally by owning and operating its stations, EVgo is able provide the best customer experience in EV charging. With its newly launched mobile app, customers can locate and utilize chargers nearby without having to carry an access card.”

The EVgo fast chargers are both CHAdeMO and CCS compatible, as a reminder. EVgo now operates in 66 of the top electric vehicle markets in the US, covering many of the major cities in the country.