Ma Earth is paying through its nose for the clothing we produce, according to a study that quantifies, for the first time, the price we exact from the ecosystem for our clothing. Case in point? Factoring in the use of water, fertilizer, and energy along the entire supply chain, a single cotton T-shirt can cost the planet more than 20 Danish kroner, or $3.40, in financial terms. Extrapolated across the industry, clothing consumption in Denmark alone plunders the environment of more than DKK 3 billion ($510 million) every year. This toll is much too high, says Kirsten Brosbøl, head of Denmark’s Ministry of the Environment, which partnered with the IC Group, operator of brands like Tiger of Sweden and Peak Performance, to commission the report. 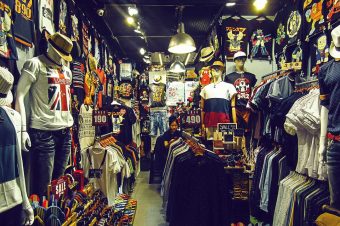 “Everything, from the enormous amounts of fertilizer and water consumption on cotton fields to carbon-dioxide emissions from leather and zip manufacture, impacts the environment,” Brosbøl says in a statement. “Now we can see what this actually costs, and even though all our clothes are produced abroad, we still have a responsibility. I call on the industry to make things better and to use these accounts to reduce their environmental footprint.”

Although Denmark hosts several well-known brands that operate both domestically and abroad, garment manufacturing within the country itself is limited. (Despite a number of cut-and-sew factories and finishing plants, it doesn’t farm cotton or produce polyester or other textiles.) In fact, more than 80 percent of Danish apparel is imported as finished product, which means that most of the industry’s impact stems from activity outside of the country, in places such as China, India, and Turkey.

“We in the clothing industry are well aware that we have some hefty environmental challenges,” says Morten Lehman, corporate responsibility manager for IC Group. “These accounts provide IC Group with a tool to further qualify our work on sustainability and to set specific targets for our sustainability efforts in our value chain.”

The report is already changing the way IC Group operates, Lehman adds. “We’ve already used the accounts to discuss CO2 emissions with factories in China; emissions we have previously considered as a problem primarily arising from raw materials production rather than at factories,” he says.

This isn’t the first time “natural capital accounting” has been used to calculate the impact of business activities on natural resources and ecosystem services. Puma popularized the concept when it released its first Environment Profit & Loss Account in 2011.