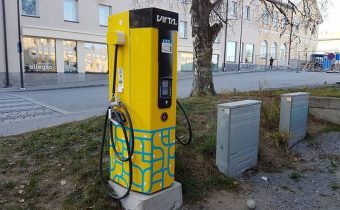 Work is underway on installing Europe’s first public vehicle-to-grid (V2G) charge point in Helsinki, which will be able to charge electric cars and deliver power back to the grid at peak times.

The new charger is being installed at Suvilahti, an event venue in the Finnish capital Helsinki, thanks to a collaboration between EV charging firm Virta, carmaker Nissan, and energy company Helen.

The site already has a solar power plant and stationary energy storage, and it is hoped the addition of EV charging will provide a public service while also boosting the stability of the grid in Helsinki.

“With the V2G charging point we can utilize the battery of a car as a part of the energy system,” explained Helen’s unit manager Perttu Lahtinen. “In the future EVs are not just a burden, but a complementary feature in the electricity grid. Helen is testing the practical operation of V2G at the Suvilahti pilot site.”

In the future, experts expect carmakers, energy companies, and EV charging firms will work closely together to integrate EV chargers into the fabric of local grids.

Under the proposed model, EVs will act as mobile battery packs, able to provide back-up power and stability to grids dominated by more intermittent sources of clean power.

There are already a handful of V2G EV charging stations across Europe – including in the UK – but none are currently open for use to the public. The Suvilahti site is part of the EU’s mySmartLife project and will be free of charge for all Virta users. In the first phase of its operation, it will only be compatible with Nissan EVs.