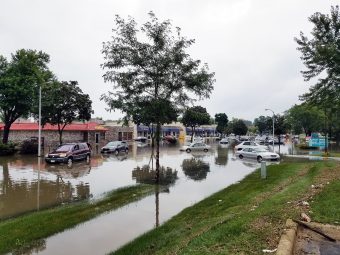 Helping to address this gap, the United Nations Economic Commission for Europe (UNECE) has released a first of its kind study mapping key areas of the main inland transport networks and nodes in the Pan-European region and Canada facing potential climate risks. The regional maps produced in Geographical Information System (GIS) format offer a tool that can help to prioritize adaptation efforts.

The need for such adaptation efforts is increasingly evident. Spain has just suffered the most powerful storms in decades, destroying bridges, and cutting off roads and railway lines. In the UK, annual costs related to flooding and other events, estimated at £50 million in 2010, could increase to up to £500 million by the 2040s. In the European Union, future costs for bridge protection against flooding have been estimated at over €500 million per year.

Complementing the mapping, the study draws on country experiences in the form of case studies, demonstrating a range of efforts that have been undertaken to analyze and adapt to climate change impacts on transport assets and operations.

One example involves analysis of future flooding of the Upper Middle Rhine Valley in Germany. In this scenario, the closure of network sections for 21 days in 2030 due to flooding of the federal highway and the closure of ferries would lead to the rerouting of around 7,000 vehicles, 56 long-distance trains, 78 local trains transporting 500,000 people, and 119 freight trains per day.

The study includes recommendations for future action at national and international levels towards improved transportation system climate resilience.  Among the key recommendations are for public administrations to make available geographical data for their transport networks and nodes, and to review all their transport infrastructure, including local assets, in Geographic Information Systems.