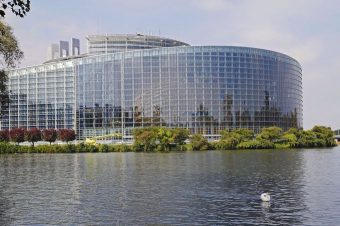 The European Parliament yesterday voted in favour of proposals to significantly strengthen the EU’s climate package through to 2030 and beyond, backing a higher renewable energy target, more ambitious binding efficiency goals, and a new 2050 ambition to build a ‘net zero’ emission economy.

The vote sets up crunch negotiations with the European Commission and European Council of member state governments, which late last year backed proposals for significantly weaker sectoral targets in pursuit of the bloc’s goal of cutting greenhouse gas emissions 40 per cent against 1990 levels by 2030.

MEPs today backed a new target for renewables to account for at least 35 per cent of the bloc’s energy mix by 2030, rejecting the Commission and Council’s initial proposal for a 27 per cent target.

The vote followed a number of reports that have suggested the plummeting cost of renewables means it would be more cost effective for the EU to adopt a more ambitious target.

Last November, Maroš Šefčovič, the EU’s Vice President in charge of the Energy Union, reportedly signalled that the commission could back a stronger target, arguing “impressive” recent falls in the price of renewables needed to be considered. He added that the cost of meeting the 27 per cent target and a 30 per cent target are roughly the same.

However, the European Council last month backed the original 27 per cent target as member states ducked a row between those countries that want a bolder target and those coal-reliant economies that are reluctant to up the pace of renewables deployment. The move was branded “feeble and lax” by green groups, who have argued that without specific targets for renewables and energy efficiency some member states will fail to introduce sufficiently ambitious decarbonisation policies.

Separately, MEPs backed a proposal to ban the use of palm oil in motor fuel in response to concerns about the impact of palm oil demand on deforestation.

But green groups were left disappointed by the Parliament’s failure to back proposals for stronger environmental safeguards on biomass sourcing.

MEPs also voted overwhelmingly in favour of a new legislative report on long term climate governance that would include a target for the creation of a ‘net zero’ emissions economy by 2050.

Quentin Genard, policy advisor at think tank E3G, said the support for a 2050 target was “a gamechanger”.

“The confirmation by the plenary of a target of net zero greenhouse gas emissions by 2050 is the direct product of the Paris Agreement,” he said. “It means that the EU is re-aligning with the new climate reality.”