Shoppers can now choose to support a broader range of social issues. 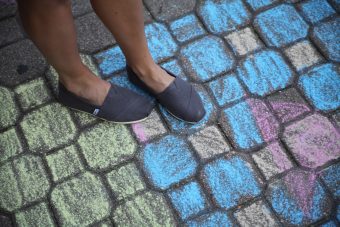 “Wear your beliefs” is a catchy tagline that appears on the TOMS website, and the company is trying to make that more accurate than ever. The maker of simple canvas shoes has long been known for its buy one/give one model that promises a new pair of shoes to someone in the developing world for every pair that is purchased. As successful as it’s been, the company has felt lately that it needs to rethink its iconic business model to better reflect customers’ interests.

Starting May 7, shoppers will be able to choose from five new giving campaigns when purchasing a pair of shoes – providing safe water, ending gun violence, fighting homelessness, supporting mental health, or working toward greater equality and women’s rights. Donating a pair of shoes remains an option as well.

The campaign to end gun violence has been ongoing since November 2018, resulting in a $5 million donation and 700,000 Americans sending postcards to their representatives in Congress to pass legislation that mandates universal background checks. But this campaign does not resonate with everyone, and the company wants to ensure that everyone feels their philanthropic tendencies are supported, hence the broadening of giving campaigns.

There has been some debate over the efficacy of the buy one/give one model that TOMS pioneered and that has become so popular among ethical retailers. Writing for Fast Company, Adele Peters cites concerns about shoe donations disrupting local economies and making people reliant on donations. Although TOMS says studies it has commissioned have not found this to be the case, there’s been an evolution in the way it (and other similar companies) implement donations. Peters writes, “[TOMS has made] sure that shoes are integrated into existing nonprofit programs and not offered on their own, for example. It also started manufacturing in some of the communities it supports to help build local economies.”

In other items sold by the company, TOMS sunglasses “can support cataract surgery and not just a free pair of glasses.” This is similar to Warby Parker’s buy one/give one model for eyeglass frames that “also trains people globally to perform basic eye exams and sell glasses for ‘ultra-affordable’ prices, which may be a better model for communities.”

TOMS’ heart does seem to be in the right place, and as ethical shopping picks up steam (three-quarters of millennials are willing to pay more for items with a ‘sustainable’ story), this company likely isn’t going anywhere. Plus, we love how simple the shoes are, featuring natural materials like hemp and cotton canvas, without a lot of plastic.

And they’re supremely comfortable, which actually has environmental implications. Lloyd just wrote the other day that shoes are an effective tool in the fight against climate change because the most wearable your shoes are, the more likely you are to walk in them – and leave your car at home.