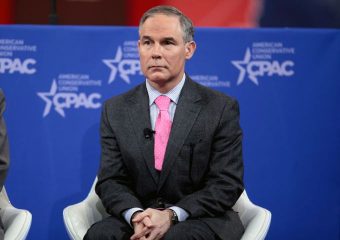 Scott Pruitt, the new head of the U.S. Environmental Protection Agency (EPA), does not think that carbon dioxide is a “primary contributor” to climate change—even though the actual science says it is.

“I think that measuring with precision human activity on the climate is something very challenging to do and there’s tremendous disagreement about the degree of impact,” Pruitt said in an interview with CNBC. “So no, I would not agree that it’s a primary contributor to the global warming that we see.”

“But we don’t know that yet … we need to continue the debate and continue the review and the analysis,” Pruitt continued.

The former Oklahoma attorney general, who sued the EPA more than one dozen times before being tapped to lead the agency by President Trump, was speaking to CNBC from an oil industry conference in Houston.

Host Joe Kernen asked Pruitt, “Do you believe that it’s been proven that CO2 is the primary control knob for climate?”—a fact that has been established by NASA and the National Oceanic and Atmospheric Administration.

Two months ago, the agencies said, “The planet’s average surface temperature has risen about 2.0 degrees Fahrenheit (1.1 degrees Celsius) since the late 19th century, a change driven largely by increased carbon dioxide and other human-made emissions into the atmosphere.”

The EPA itself says that greenhouse gas emissions including CO2 “threaten the public health and welfare of current and future generations.” Even the EPA’s kids website says that the rapid burning of fossil fuels has added carbon dioxide to the atmosphere faster than natural processes can remove it.

“That’s why the amount of carbon dioxide in the atmosphere is increasing, which is causing global climate change,” the site states.

“It’s become abundantly clear by now that Scott Pruitt is an anti-fact, anti-science climate change denier,” Food & Water Watch executive director Wenonah Hauter said. “Does he also believe the Earth is flat? Does he also believe the Moon landings were a hoax? More likely, he’ll simply say and do anything necessary to promote the corporate interests and enable the profits of the oil and gas industry. Anyone concerned about the future of our planet should be resisting the pro-polluter Trump/Pruitt agenda at every turn.”

“The arsonist is now in charge of the fire department, and he seems happy to let the climate crisis burn out of control. As Pruitt testified before Congress, it is the legal duty of the EPA to tackle the carbon pollution that fuels the climate crisis, but now he is spewing corporate polluter talking points rather than fulfilling the EPA’s mission of protecting our air, our water, and our communities,” Brune said. “Pruitt is endangering our families, and any sensible Senator should demand he is removed from his position immediately for misleading Congress and being unfit and unwilling to do the job he has been entrusted to do.”

And, as Environmental Working Group President Ken Cook retorted, “We wanted to check EPA Administrator Pruitt’s comments with appropriate scientific experts but all the fifth graders we know are still in school.”

Unlike many of the outright climate deniers in his political party including President Trump who believes global warming is a “hoax,” Pruitt has admitted that climate change is real and humans contribute to it. However, his official position remains that humanity’s impact on our warming planet is “subject to continuing debate.”

During his contentious confirmation process, Pruitt said he was “aware of a diverse range of conclusions regarding global temperatures, including that over the past two decades satellite data indicates there has been a leveling off of warming, which some scientists refer to as the ‘hiatus.'”

Pruitt was sworn in as EPA head on Feb. 17. Trump and Pruitt have both expressed plans to overturn Obama-era climate regulations, including the Clean Power Plan which requires states to reduce carbon dioxide emissions from power plants.

As The Hill explained, Pruitt’s recent exchange with CNBC is likely political:
“His CNBC comments could hint that Pruitt wants to reconsider the EPA’s 2009 ‘endangerment finding,’ in which it concluded that greenhouse gases harm public health and welfare and should be regulated.

“The finding is the backbone of the Obama administration’s climate regulations, since it obligates the EPA to regulate emissions if it finds it necessary to do so. When Pruitt was Oklahoma’s attorney general, he unsuccessfully sued to have it overturned.”

“This is like your doctor telling you that cigarettes don’t cause cancer,” Jamie Henn of 350.org said. “Pruitt’s statement isn’t just inaccurate, it’s a lie. He knows CO2 is the leading cause of climate change, but is misleading the public in order to protect the fossil fuel industry.”

Pruitt’s comments come at the heals of Mustafa Ali, the EPA’s head of the environmental justice program, stepping down from his position after 24 years at the agency, InsideClimate News reported.

Along with his resignation, Ali wrote a letter to Pruitt urging him not to kill the agency’s programs that might face the chopping block due to the Trump administration’s proposal to slash the EPA’s $8 billion budget by $2 billion and cut its 15,000 employees by 20 percent.