Tackling climate change will require huge changes in society. Decarbonizing energy, restoring habitat and making food supply sustainable are all critical, but methods for motivating these actions have typically taken the wrong approach—by highlighting the urgency of the issues and the disastrous consequences of failing to act. 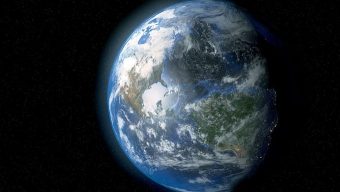 Research increasingly suggests that trying to promote behavioral change through fear can be counterproductive, leading to anxiety or depression that results in an issue being avoided, denied or met with a sense of helplessness. However, in education, news and fiction, stories with positive role models and which focus on the positive outcomes of solutions are much more likely to inspire action to solve it.

The Power of Positive Stories

I set out to explore the impact of such stories. As part of my research, 91 volunteers were given two stories to read, each concerned with the negative impacts of climate change: one about a woman caught in a flood and the other set at the end of the world.

The same readers were also exposed to two positive stories: one about a terrorist planting a flower bomb, which populates a bare area with flowers, the other about a young boy who, having watched Blue Planet, takes to collecting plastic to stop it entering the oceans—starting with his fish tank. Afterwards the readers were asked how the stories made them feel and to reflect on what kinds of behaviors they inspired.

While the negative stories motivated action for a few, most said they were discouraged. “I’d rather not think about it,” said one. “It made me angry and I switched off,” said another. Many also reported a sense of passive despair. “I felt hopelessness. If indeed, the heavy rain was caused by climate change, what can we do about it?”

However, there were no signs of avoidance among readers of the positive stories.

“It made me want to flower bomb land and do something positive and I felt happier after reading it,” said one reader.

“I felt inspired by the way the characters behaved … [the story] made me think about what I could do.”

This is concerning because almost all stories set in the future, whether in books, films or TV shows, are dystopian. The popular TV show Black Mirror tells cautionary tales about modern life and technology with often terrifying consequences. These stories elicit anxiety, pessimism and a feeling of passive fatalism.

I realized from my research that we desperately need cultural offerings with positive visions of what a sustainable society might look like, to inspire hope and positive change.

The University of Southampton runs writing competitions that ask people to read about green solutions and integrate them into stories. These ideas include replacing how much people buy, represented as GDP—the current measure of how successful society is—with a measure of well-being. Another looks at the potential of a “sharing economy,” in which more people borrow goods others have without needing to buy more themselves.

It can be hard for politicians to support green policies such as these when green issues evoke catastrophe in the minds of voters they’d rather not think about. Reframing issues in terms of their solutions and highlighting them through engaging characters and stories might be a more effective way to encourage change.

One winning short story was Come Help Me by Nancy Lord—a romance about an American fisherman and a Russian marine scientist.

The protagonist is inspirational and proactive: he spots a tension between the scientists concerned with the marine environment and the fisherman who needs to make a living. The writer finds a way to help them work together. We also loved the runner up, The Buildings are Singing, by Adrian Ellis, which made us laugh out loud.

This short story imagines a future world where buildings are alive—covered with photosynthesizing plants which create energy, light and shade for the occupants. The flora operates an artificial intelligence system which helps occupants live sustainably. Insects drawn to the foliage become nourishing protein bars and life for the humans is low carbon and almost utopian—unless you do something wrong.

Some stories are specifically about sustainable societies, whereas others showcase ideas that would seem radical in otherwise familiar tales, such as Just in Case, which imagines a society where we borrow rather than buy much of our stuff. The woman who runs the “library of things” in the story, plays matchmaker with two customers who she can tell are compatible by their borrowing patterns.

The transition to a sustainable society requires profound changes, but to imagine how all of these aspects can come together is currently the domain of creative fiction. If we want a better world then the first step is to imagine one.