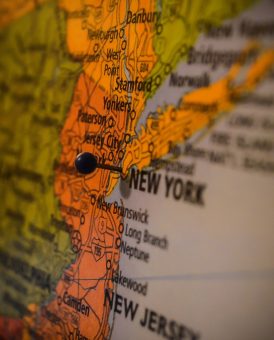 Members of environmental groups and electric car owners gathered at The Peacock Inn in Princeton on Monday to call for increased electric car infrastructure in New Jersey.

They also touted a study with 50 steps toward a carbon-free transportation system.

The findings are especially important for the state as transportation is responsible for 53 percent of New Jersey’s global warming emissions, according to the event’s organizer, Environment New Jersey — a citizen-based advocacy project.

“America’s transportation system is climate enemy number one,” Marc Katronesky of Environment New Jersey said. “There is hope however.”

“First and foremost… public funding should prioritize low-carbon efficient transit, and secondly, polluting vehicles and polluting fuels should be phased out with higher vehicle standards.”

Environment New Jersey distilled the 50 steps further, saying that some key points include:
-Make addressing global warming a strategic goal
-Stop doing further environmental harm
-Get the most out infrastructure that we already have
-Level the playing field for shared mobility
-Harness the power of markets
-Hasten the introduction of low carbon vehicles
-Hasten the introduction of low carbon fuels
-Reform the transportation bureaucracy

Speakers recapped some of the reasons the state is lagging in electric car infrastructure and then spoke about the future of electric cars and the necessary charging stations.

“More than a decade ago, the car industry actively lobbied against clean car legislation by lampooning electric cars,” Doug O’Malley of Environment New Jersey said. “They literally drove an electric-powered golf cart around the statehouse to say that ‘these are the options you’ll have if electric cars come to New Jersey.'”

“If this is an electric golf cart sign me up,” O’Malley said while gesturing to a 2009 Tesla Roadster behind him.

“(Electric cars) are without a doubt an evolution of the old internal combustion engine car,” Michael Thwaite, president of Plug in America, said. “That vehicle took over from the horse and buggy and it’s done us proud for a hundred years, but what we’re looking at today is… the same kind of evolution.”

Thwaite says that soon electric cars will become as ubiquitous as smartphones and there should be no delay in building support infrastructure. “The technology in the (battery) cells has doubled since I owned my car in the last seven years,” Thwaite said, pointing out the accelerated advances.

“We need the charging infrastructure to catch up,” O’Malley said. “There are only, roughly, 400 hundred charging stations in the state right now.”
Electric car drivers on hand touted the gas-savings and the benefits of installing solar panels on their homes to charge their cars for free.

One electric car owner, Tom Moloughney, says that after buying an electric car for himself, he began to install charging stations on his shopping center properties.

“To get on the right track New Jersey will need to reevaluate how it is implementing its transit system,” Katronesky said.