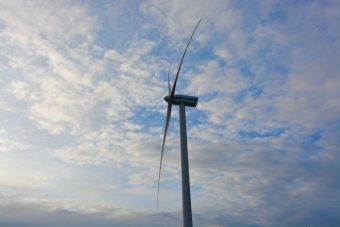 The announcement was made on Friday in which Enel Green Power North America revealed that Alternative Energy Investing Group of Goldman Sachs and GE Energy Financial Services would together purchase 100% of the 298 MW (megawatt) Thunder Ranch wind project’s Class B and Class C equity interests in exchange for payment of approximately $330 million. Enel Green Power will retain 100% of Thunder Ranch’s Class A interests and control of the project.

These tax equity investments are traditional financing methods for the development of renewable energy projects across the United States. In turn, Goldman Sachs and GE Energy Financial Services will receive a percentage of the financial benefits generated by Thunder Ranch.

Construction of the 298 MW Thunder Ranch wind project began back in May after Enel Green Power committed approximately $435 million into the project, part of the company’s larger investment plans. Upon completion, Thunder Ranch generate more than 1,100 GWh (gigawatt-hours) of clean energy each year and provide enough electricity to meet the needs of the equivalent of 89,400 US homes, and subsequently avoid CO2 emissions worth around 790,000 tonnes.

Thunder Ranch was also in the news last month as the focus of a Power Purchase Agreement (PPA) concluded by Missouri-based Anheuser-Busch, brewer of drinks such as Budweiser and Stella Artois, and one of America’s leading breweries. Anheuser-Busch announced mid-September that it would purchase 152.5 MW generated by Thunder Ranch to support its brewing operations in the United States. Further, the company can now boast 50% renewable energy purchased, and the ability to produce 20 billion 12-ounce servings of beer each year.

“As we strive to bring people together to build a better world, we at Anheuser-Busch are dedicated to reducing our carbon emissions,” said João Castro Neves, president and CEO of Anheuser-Busch at the time. “Helping to grow the renewable energy market is not only good for the environment, it is a strategic business move as we strive for long-term sustainability. Now more than ever, we are excited to lead our company’s global effort toward a renewable future and, partnering with Enel, set an industry example of how major companies can help to make a difference in climate change.”