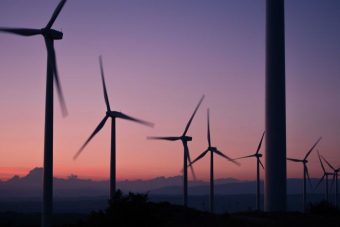 Ecotricity has officially switched on its Alveston onshore wind farm in Gloucestershire, warning the 6.9MW project could be one of the last of its kind to be built in England.

More than a decade in development, the three-turbine wind park close to the M5 motorway is expected to generate enough power for more than 3,000 homes over the next 30 years.

The site also has planning permission for a 10MW grid-scale battery storage project, which the firm said could share the grid connection with the turbines to better manage supply and demand.

The project was officially opened yesterday by Ecotricity founder and CEO Dale Vince, who lamented the fact the onshore wind development could be one of the last to be built in England for years to come due to current government policy.

The government has locked onshore wind and solar farm out of competitions for clean power contracts and has previously tweaked planning rules to make it harder for projects to gain consent. The Conservative Party manifesto at the last election explicitly ruled out financial support for new onshore wind farms in England, despite the technology offering the lowest costs form of clean power capacity.

The government has recently said it is exploring whether onshore wind projects in parts of Scotland and Wales could bid for price support contracts through in future clean energy auctions if it can get around current rules that prevent geographically-specific support.

Meanwhile, the Welsh Government last month urged the government to “think again” on its onshore wind ban, which it said was “threatening” the renewables sector. A recent ECIU report also claimed onshore wind was the cheapest form of new power generation available, and that failure to develop such farms in England could add more than £1bn to consumer bills over the next four years.

However, while some companies are said to be exploring ways to build subsidy free onshore wind farms the effective block on new developments in England remains in place.

“It’s always great to build another wind park and put it into operation,” he said. “This one is a little bittersweet because without a change of government, or government policy, this could be the last one built in England. Current government policy to prevent new wind parks in England makes no sense and is a political choice – because onshore energy isn’t just good for the environment, it makes good economic sense too.”

The news comes after Ecotricity last week announced a partnership with EV chargepoint firm Rolec as part of a bundle of new energy tariff offerings for customers who drive electric vehicles.