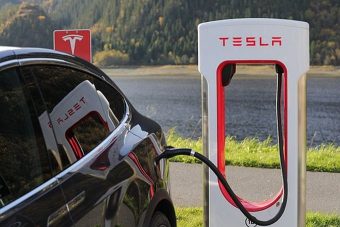 Amsterdam Airport Schiphol is incrementally electrifying transportation on, from, and to the aviation hub. Being the largest airport in the Netherlands and the 3rd largest player in Europe, with 63.6 million passengers handled in 2016, Schiphol has expressed an ambition to become the most sustainable airport in the world. An important means of reaching this goal is by switching over to electric drivetrains for vehicles operating on the airport itself, as well as for transportation of passengers to and from Schiphol Airport.

Schiphol’s most striking move towards a more sustainable future might be the procurement of as many as 167 Teslas in 2014, to serve as its taxi fleet to bring passengers to and from the airport. Anyone arriving at Schiphol will be amazed by the number of Teslas waiting in front of its main entrance to pick up customers.

Other electric taxi services in the area have also emerged independently of Schiphol Group, such as Taxi Electric, which actually launched 5 years ago.

VIP taxi services that bring those who have the money directly to their aircraft in luxurious, mostly German cars are made more sustainable too — although, progress is slower here. Instead of switching to full EVs, plug-in hybrids are gradually being introduced.

A less well known, but no less impressive electrification feat concerns Schiphol’s airside bus fleet, which is used to carry passenger to airplanes when jetways are not available. Since 2015, 35 fully electric buses have been in operation, driving 338,000 km in their first 6 months after commissioning and saving 312,000 kg of CO2 emissions. Chinese manufacturer BYD, which supplied the buses, says they consume about 1.2 kWh of electricity per km, giving them a range of 250 km on a single charge.

Meanwhile, public bus transport around Schiphol is electrifying as well. Starting this year, bus operator Connexxion will start operating an incredible 100 fully electric buses in the area, which will among others be operated on routes to and from Schiphol. These buses will be supplied by VDL, a large Dutch manufacturing company. A slide from Dieme Ketel’s rEVolution 2017 presentation also included a pic of a Mercedes bus, however.

Besides for passenger transport, many other vehicles are in operation at the airport and these too are included in Schiphol’s sustainability agenda. For example, the airport is currently electrifying its aircraft handling, belt loaders, and aircraft cleaning vehicles. All carts for cleaning and transport indoors have already been electrified. So, Schiphol appears to be quite on top of reducing its airside vehicle emissions. Unfortunately, the airport does not seem to provide any numbers on the size of these electrification efforts.

Schiphol is also working on reducing the emissions of the airplanes it handles, by electrifying part of their power supply. Whenever airplanes are being loaded and unloaded, they still need electricity for things like climate control and starting up the main engines. Normally, this power is generated by a small auxiliary engine in the tail of the airplane, but these engines are rather polluting since they run on kerosene or a diesel-powered generator on the ground. In place of those, Schiphol has now equipped 70 aircraft stands with 400 Hz fixed electrical ground power chargers, which means that the kerosene or diesel generators for planes parked at these stands can remain unused. In 2015, 53% of all flights have been handled in this way, making for a massive emission reduction. Hopefully Schiphol will boost this figure much further in the coming years.

Clearly, as a facilitator of air traffic, Schiphol can be seen as a major CO2 emitter, and all efforts to reduce carbon output of the airport’s own operations might seem meaningless against the almost 500,000 annual takeoffs and landings the airport handles. But given that people demand flights and flying is not illegal, airports will be there anyway, so in that case we should at least have them be as eco-friendly as possible. I think it’s therefore to be applauded that Schiphol is demonstrating serious commitment to limiting its ecological footprint and is taking an active role in reducing transport emissions. Perhaps it will be the first fully electrified international airport.

It should be mentioned here that Schiphol is also working in other ways to achieving its sustainability goals. These include waste recycling, the implementation of reusable building materials and energy efficiency measures, and many other solutions that might be in the spotlight in some future articles.