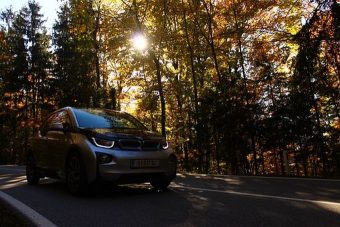 Last week, federal investigators reported that the battery of a Tesla Model S reignited twice after the car’s fiery crash in May. This isn’t the first time an electric vehicle battery has caught fire again after being put out. Why does this happen — and how are first responders being trained to deal with new risks from EV batteries?

The lithium-ion batteries in electric vehicles are basically the same as the ones in your phone, says Joshua Lamb, a principal investigator at Sandia National Laboratories’ Battery Abuse Testing Laboratory. There’s just more of them. Unfortunately, li-ion batteries are prone to exploding anyway when they get overheated or when the wrong charger or current is used.

“There’s always a risk when you’re talking about any kind of stored energy,” says Lamb. But that doesn’t mean EVs are inherently more dangerous; after all, there are plenty of gasoline car fires, too. “We just have 100 years of trial and error with gasoline fires that we don’t have with modern electric vehicles,” he adds. “The main issue is that we don’t necessarily have the same comfort level with the different failure modes.”

So what do first responders need to do differently when they encounter an EV fire?

The first step is identify the vehicle — not only that it’s an electric vehicle, but also the model so they know where the battery is and how to shut down the vehicle, says Michael Gorin. Gorin is program manager of emerging technologies at the National Fire Protection Association, a nonprofit that works with firefighters and first responders. Many EVs run silently, so there’s a risk that a firefighter won’t realize the vehicle is still on and will try to help the driver while they’re still in the car. Or the first responder who is unaware might get shocked by the voltage.

Reignition like the Tesla case is a problem, too. “With a gasoline fire, once you put the fire out, you take away the fuel,” says Lamb. “But with batteries, even once you put the fire out, there’s stored energy inside. You can have significant damage to a system without it being entirely discharged.” The undamaged cells of the battery can still get hot and discharge stored energy. Then, says Marca Doeff, a battery expert at Lawrence Berkeley National Laboratory, all you need is oxygen from the air and heat — maybe hidden smoldering embers, maybe from the battery’s own voltage — to reignite.

It takes at least 2,600 gallons of water to put out a battery fire, according to Gorin, and handling the battery or moving it can make it more prone to reigniting. (This is why the Tesla first responders guides suggest letting the batteries burn out.)

In truth, we still don’t have the data yet on the dangers of EVs versus regular cars. There’s a vehicle fire on a US roadway about every three minutes, Gorin says, but we don’t know how many of those are electric. But since the technology is so new, each accident merits a lot more attention and scrutiny. For what it’s worth, Tesla claims that — based on reports from their 300,000 vehicles on the road — its EV is 10 times less likely to catch fire than a gas car.

Of course, EV batteries are already engineered to protect against common causes of fire. Tesla’s batteries, for example, consist of cells divided into separate modules. These modules are each separated by a firewall to limit the risk of fire spreading, according to a company spokesperson. Plenty of researchers are trying to develop safer batteries with less flammable materials, Lamb says. But these chemical formulations don’t store as much energy, so they’re less likely to be commercialized. And accidents happen with even the most careful engineering.

For the past nine years, NPFA has run an EV safety training program for emergency responders and created guides for responding to fires in a vehicle that uses an alternative source of fuel, meaning electric cars, natural gas cars, and hybrids. They’ve worked with the US Department of Energy, the Federal Emergency Management Agency, and other groups to travel around the country and train fire responders in person. Gorin estimates that, of the one million firefighters in the US, they’ve trained about 250,000. (A spokesperson for Tesla confirmed that its batteries comply with NPFA standards, and added that first responders can reach out to the company via a hotline.)

NPFA has done trainings in California, New York, and Florida, and is working with the DoE to identify areas that have the most alternative-fuel vehicles to continue training. Some states are aware of the need for more training but others “may not have that awareness and we’re raising that in addition to the actual training,” Gorin says.