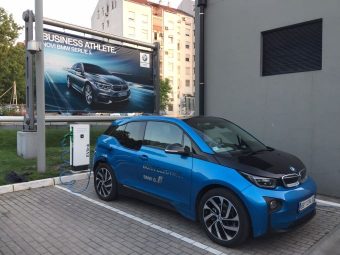 Regular readers of this column are well aware of the wonderful benefits of EV ownership. However, electric vehicles can also have a positive impact on the electric grid, serving as the perfect complement to renewable energy sources. Jeff McMahon, writing in Forbes, notes that a growing body of evidence supports the idea that the spread of EVs is good news for electric ratepayers.

“These vehicles plug into our electricity system, and a number of cost-benefit studies are showing that this can be really beneficial to all ratepayers, not just the drivers of the vehicles,” said Matt Stanberry of the trade group Advanced Energy Economy (AEE). “As you increase electricity sales for charging the vehicles, it has the effect of driving down rates for all ratepayers because it spreads the fixed cost of the system out across a larger volume of sales.”

McMahon cites a 2017 study by M.J. Bradley & Associates, which analyzed the impact of EVs in five US states, and found that the benefits flow not only to EV owners in saved fuel and maintenance costs, and to society in reduced carbon emissions, but also to electric ratepayers in the form of reduced fixed costs. In fact, the study found that in some cases utility ratepayers benefited more than the EV owners themselves. For example, in New York the study found $265 in annual benefits from a plug-in vehicle: $18 for the owner, $166 for the utility customer, and $81 for society in reduced emissions.

Siemens, which manufactures EV charging equipment, has obvious reasons to take an interest in the issue. “We have heard the complaint come up that the utility-funded programs for EV charging infrastructure are a subsidy to EV owners, who tend to be well off in the first place and are driving their Teslas,” said Chris King, Chief Policy Officer at Siemens Digital Grid. “That couldn’t be more wrong.”

“California, which has close to half a million [EVs], is looking at net benefits already exceeding $1 billion. And this is to non-participating ratepayers,” King said during a recent webinar. King estimates that an EV can produce $2,000 to $2,500 in benefits over its 10-year lifespan. From this standpoint, investments in charging infrastructure benefit all ratepayers, not just EV owners. “It’s not a subsidy in any way to those EV drivers,” he says.

The benefits to utility customers should only increase as more drivers go electric. E3 has developed a model that can be used to estimate the benefits at different levels of EV penetration. However, for the maximum positive impact on the grid, EV drivers need to charge their vehicles at off-peak times, when there is spare capacity on the electric grid.

McMahon writes that state regulators should not only encourage utilities to invest more in public charging infrastructure, but also to introduce time-of-use (TOU) rates, which offer customers a discount for charging during off-peak hours.

However, there’s another major obstacle to overcome. There is “a lack of customer awareness of the availability of electric vehicles as an option for potential buyers who go out on the market looking for a new car,” says AEE’s Matt Stanberry. He notes that some surveys have found that 60 percent of buyers are unaware that EVs are a viable option, but other surveys have found that up to 84 percent say they would be interested in an EV once the benefits of driving electric are explained. “So there’s a disconnect here.”

Could utilities play a bigger role in educating the public about EVs? “Utilities are really well positioned to help in this education process,” says Stanberry. “They are connected to all ratepayers, and they can really help ratepayers understand the benefits of EVs and [the process of] charging.”