Change is a funny thing. You can’t see it, hear it, feel it, or taste it, but one day you look around and suddenly, there it is. Isbrand Ho, managing director for BYD in Europe, tells Bloomberg he was laughed out of the room at a conference in Belgium 7 years ago when he introduced a prototype of the electric bus his company had developed. “Everyone was laughing at BYD for making a toy,” he recalls. “And look now. Everyone has one.” 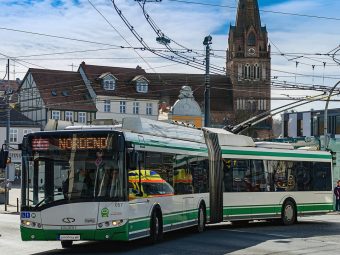 Everyone is right. While China has seen the biggest surge — Shenzen, BYD’s home city, now has 16,359 electric buses — they are making inroads into public transportation fleets around the world. They are in London, Poland, Brazil, Portugal, and Korea. Oslo plans to add 70 electric buses by next year and Paris is making plans to add 1,000 of them over the next 5 years.

There are now almost 400,000 electric buses in the world — the vast majority of them in China — according to BNEF. Every five weeks, China adds 9,500 more, equal to London’s entire bus system. All those electric buses are beginning to have an impact on the demand for diesel fuel. By the end of this year, Bloomberg believes electric buses will be displacing 279,000 barrels of diesel fuel per day. That’s about as much as Greece consumes on a daily basis.

“This segment is approaching the tipping point,” says Colin Mckerracher, head of advanced transport at the London-based research unit of Bloomberg LP. “City governments all over the world are being taken to task over poor urban air quality. This pressure isn’t going away, and electric bus sales are positioned to benefit.”

BYD estimates its buses have logged 10 billion miles and saved 1.8 billion gallons of diesel fuel over the past 10 years. According to Ho, that means as much as 18 million tons of carbon dioxide pollution has been avoided, which is equivalent to removing 3.8 million cars from the world’s roads.

Keeping all that pollution out of the air pays major dividends. Shenzen once had some of the worst smog in all China, which is saying something in a country where smog has become a major contributor to poor health, accounting for 1.6 million extra deaths in 2015 according to Berkeley Earth.

“The first fleet of pure electric buses provided by BYD started operation in Shenzhen in 2011,” Ho says. “Now, almost 10 years later, in other cities the air quality has worsened while – compared with those cities — Shenzhen’s is much better.”