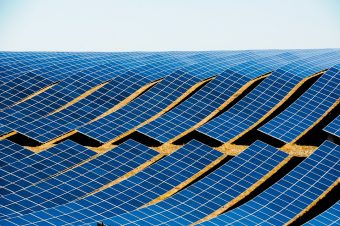 Egypt has long relied on environmentally taxing fossil fuels. Over 90% of electricity is generated from oil and natural gas, and the country subsidizes fossil fuels, making them a cheap option for its 96 million citizens. However, Egypt’s government plans to change courses and put itself on the clean energy map with the inauguration of the world’s largest solar park. Dubbed the Benban complex, it is under construction in Egypt’s Western Desert and set to open next year.

Located 400 miles south of Cairo, the $2.8-billion project will single-handedly revolutionize energy supply for the nation, and none too soon. The World Health Organization recently named Cairo the second most polluted large city on the planet. The Egyptian government, in response, aims to nearly halve its natural gas consumption and provide at least 42% of the country’s energy from renewable sources by the year 2025. Investment in Egypt’s clean energy market has increased by 500% since the announcement.

The country’s prospects look good, says Benjamin Attia, solar analyst at Wood Mackenzie, an energy research and consultancy firm based in the United States. “I can’t think of another example where so many big players have come together to fill the gap,” he stated, referring to the role of the International Monetary Fund (IMF) in supporting the Benban complex. The IMF has backed a reform program that aims to rescue the country’s economy, and scaling back fossil fuels is one part of it.

Egyptian President Abdel Fattah Sisi has unequivocally encouraged the country’s environmental push, inaugurating other big electricity projects, including the creation of wind power farms in the Red Sea’s Gulf of Suez. Several nations have aided with the initiative, including the United States, which is helping to train hundreds of employees in wind and solar energy at local technical schools in Egypt. The Benban complex’s 30 solar plants will be operated by 4,000 workers and generate as much as 1.8 gigawatts of electricity, which will in turn provide energy to hundreds of thousands of residences and business operations.