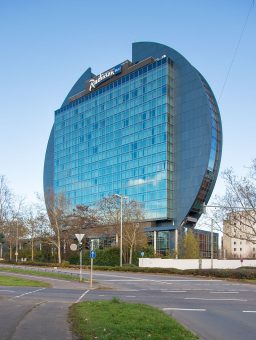 A hotel in Frankfurt is to go “free of emissions” thanks to the installation of an industrial scale fuel cell that will deliver clean power and heat to the site.

Radisson Blu announced this week it has partnered with energy giant E.ON to install the fuel cell at its flagship 400-room hotel in Frankfurt, Germany. The technology is scheduled to start generating from this summer, providing 3GWh of electricity and 2GWh of heat to the hotel while cutting carbon emissions by 600 tons a year.

The project features technology supplied by FuelCell Energy Solutions and was backed by an €800,000 grant from the German government’s National Hydrogen and Fuel Cell Technology Innovation Program, which seeks to demonstrate the viability of large scale fuel cell generators.

Inge Huijbrechts, vice president of responsible business at the Carlson Rezidor Hotel Group, the parent company of Radisson Blu Hotels, hailed the project as “the first of its kind in Europe”.

“The project will help expand our innovative sustainability work and bring us an important step closer to achieving our ambitious Think Planet goal of reducing the CO2 consumption in our hotels by another 10 percent by 2020,” she added.

The project also represents an important milestone for E.ON, which has identified the hotel sector as a potential new market for a wide range of clean tech and energy efficiency solutions.

“E.ON sees enormous potential energy savings in the hotel industry: energy intensive processes such as heating water, lighting and cooling mean that a hotel requires substantial amounts of electricity and heat throughout the entire year,” the company said in a statement. “Compared to office buildings, the hotel industry has relatively high energy costs – on average between five and 10 per cent of total operating revenue.”

Karsten Wildberger, member of the executive board at E.ON SE, said the “continuous growth in the hotel industry makes it an important market for E.ON’s energy solutions business”.

“Innovative energy solutions such as fuel cells can supply added value for hotels, as they significantly lower energy costs and dramatically increase environmental friendliness – up to the point of being climate neutral,” he added.