Evides Waterbedrijf is a water supply company in the Netherlands. It estimates it could generate all the electricity it needs to power its pumping and distribution operations if just 30% of the reservoirs it manages were covered with floating solar panels. But before it makes that commitment, it’s dipping its toe in the water, so to speak, by constructing a 1.62 MW floating solar power plant at a reservoir in Kralingen near Rotterdam. Once completed, it is expected to supply 1.7 million kWh of electricity annually — about 15% of what is needed to run the Kralingen facility. 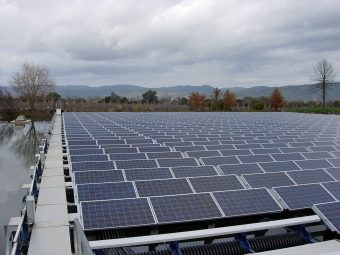 That’s a pretty small installation and probably would have escaped our notice but for one thing. Once the 4,787 solar panels are in place, the company plans a rigorous examination of how the floating solar system impacts water quality in the reservoir. According to PV Magazine, the analysis will focus on algae growth, the spread of bacteria from bird droppings, the effect of reduced UV radiation on the water, and the impact of the wind. “It is essential that the water quality in the reservoir remains good,” the company says.

Assuming the testing shows no decrease in the quality of the drinking water the company supplies to customers, it may proceed with plans to add floating solar to three other reservoirs, including the Biesbosch reservoir that covers 35o hectares. In all, the Netherlands has about 52,000 hectares of shallow water pools that could serve as the basis for other floating solar installations. Not all that water is used to supply drinking water, so some degradation in water quality would not be as much of an issue as it is with a public drinking water supply.

Evides is subject to the Rijkswaterstaat, the water management agency for the Netherlands. The Dutch Foundation for Applied Water Research (STOWA) is also part of the group, which is overseen by the Dutch Ministry of Infrastructure and the Environment and the Solar Energy Application Community (SEAC).

Rijkswaterstaat, in turn, is part of the Dutch Ministry of Infrastructure and the Environment, which announced in March of 2017 it planned to make water surfaces and land under its control available for the installation of renewable energy plants. Evides is beginning to turn those plans into reality.