If there’s one resource that Dubai has in abundance, it’s sunshine. Not surprisingly, the city, set in a sun-drenched desert, has set out to exploit that inexhaustible resource for clean energy generation. 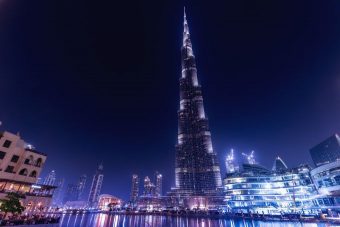 The United Arab Emirates, to which Dubai belongs, wants to meet 7% of its energy needs from solar by 2020 and then gradually increase the share of solar power in subsequent years. As part of that plan, Dubai is busy constructing the Mohammed bin Rashid Al Maktoum Solar Park, a mega solar project that, when fully completed, is expected to boast a total solar power capacity of 5,000 megawatts by 2030.

The current fourth phase of the $13.6 billion project, which is the largest solar park of its kind in the world, will rely on a combination of three technologies to produce 950MW of clean energy: a parabolic basin complex to provide 600MW, photovoltaic panels to generate 250MW, and a solar tower to provide another 100MW.

The project, with three of its phases already completed, has already “achieved the lowest electricity generation cost in the world, of 2.4 US cents per kilowatt hour for the 250MW panels and 7.3 cents per kW/h for the 700MW CSP technology,” The National notes. “The total capacity of the fourth phase of the solar park rose from 700MW to 950MW.”

Another record-setting feature of the solar park will be a solar tower. Standing at 260 meters as the world’s tallest such tower, the 100MW construction will boast round-the-clock thermal energy storage capacity. The technology involved will rely on heated molten salt stored at the top of the tower with residual heat of the salt capable of generating power for another 15 hours after sunset.

“Our focus on renewable energy generation has led to a drop in prices worldwide and has lowered the price of solar power bids in Europe and the Middle East,” stressed Saeed Mohammed Al Tayer, managing director and CEO of the Dubai Electricity and Water Authority (DEWA).