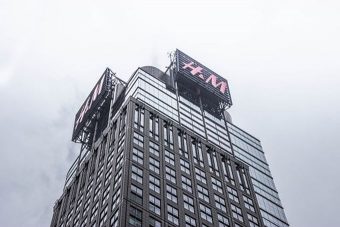 Swedish fashion giant H&M has unveiled new plans to become a ‘climate positive’ retailer throughout its value chain by 2040.

The headline target is a key plank of the retailers new ‘100 per cent’ strategy, launched earlier this week, which sets out its plan to curb the environmental impact of the mass market retail sector.

Under the new strategy H&M, which boasts more than 4,300 stores around the world, has promised to use 100 per cent recycled or sustainably sourced material by 2030 and deliver a ‘climate neutral’ supply chain by 2030.

The targets are the latest in a series of sustainability commitments from the fashion retailer, which has backed material recycling technologies and has a long-standing eco-friendly ‘Conscious Collection’.

However, the company has faced criticism from some green groups for its role in so-called “fast-fashion”, a term used to describe a sector of the industry which promotes the consumption of low cost clothes that are discarded each season.

“We want to use our size and scale to lead the change towards circular and renewable fashion while making our company even more fair and equal,” she said in a statement. “We want to lead by example, pave the way and try new things – both when it comes to the environmental and social side – to ultimately make fashion sustainable and sustainability fashionable. Our climate positive strategy is one way of doing this.”

To achieve its ‘climate positive’ goal, H&M plans to deliver a ‘climate neutral’ supply chain for its Tier 1 and 2 operations by 2030 – a target which covers all manufacturing and processing factories owned or subcontracted by its suppliers, as well as other selected suppliers, including those providing non-retail goods such as store interiors.

Following that goal, H&M said it will invest in offsetting measures, such as projects to protect carbon sinks, in order to deliver a ‘net positive’ environmental impact by 2040 at the latest.

H&M has teamed up with WWF to deliver the new strategy. Manuel Pulgar-Vidal, leader of the charity’s climate and energy practice, said the retailer’s goals were “hugely ambitious”.

“The H&M group has committed to reduce more greenhouse gas emissions than they are responsible for by 2040,” he said in an interview published in H&M’s report. “This is hugely ambitious, especially considering the scale and complexity of their value chain.”

He continued: “The most challenging aspect is therefore also within the value chain. For example, how to ensure that the H&M group’s suppliers adopt similar ambitions, how to influence customer behaviour, how to address impacts related to material needs and recycling of garments. These will all take capacity building, awareness raising, innovative approaches and overall collaboration across the H&M group’s value chain.”

A number of targets are set out in the report to act as milestones towards the over-arching goals for 2040. For example, the company plans to cut energy use in its own operations by 25 per cent by 2030 against a 2016 baseline and deliver a 30 per cent cut in emission per product by 2025 against a 2017 baseline.

H&M also plans to become “100 per cent circular” with key milestones including a target to only use recycled or sustainably sourced material in its clothing by 2030. In 2016, that figure stood at 26 per cent.

Last month the retailer launched its latest eco-collection, Conscious Exclusive, which uses fabric made from recycled plastics and fabrics.

The new strategy comes as competition heats up between fashion giants eager to prove their green credentials. In recent months both Zara and Mango have launched new sustainable collections, while luxury fashion house Kering recently set out its new plan to cut its environmental footprint by 40 per cent by 2025.