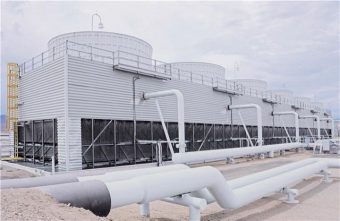 Heating homes and offices without adding to the dangers of climate change is a major challenge for many cities, but re-imagined district heating is now offering an answer.

A district heating scheme is a network of insulated pipes used to deliver heat, in the form of hot water or steam, from where it is generated to wherever it is to be used.

As a way of providing warmth for thousands of homes, typically in multi-storey apartment buildings, district heating has a long history in eastern Europe and Russia. But the hot water it distributes typically comes from power stations burning coal or gas, which means more greenhouse gas emissions.

Tapping into other forms of producing hot water, from renewable energy, bio-gas or capturing waste heat from industrial production, supermarkets or IT systems, provides alternative sources of large scale heating without adding to the carbon dioxide in the atmosphere.

Sweden has pioneered the switch from fossil fuels to other ways of heating water. The Swedish Environmental Protection Agency said the country has gone from almost exclusively relying on fossil fuels to being 90 percent powered by renewable and recycled heat in 2017.

Today Stockholm, the capital, which needs heating for nine months of the year, contains 2,800 km of underground pipes connecting to more than 10,000 buildings, said Erik Rylander from Fortum, an energy company active in Nordic and Baltic countries.

“As long as you have a water-based heating circuit in your building (which basically all bigger buildings in Sweden have), the connection is easy,” he explained. “A heat exchanger is placed in the basement which connects the district heating system to the building’s heating system.”

Further south in Spain, where heating is mostly required only in the winter months, winning public acceptance for the need to install district systems has been more difficult.

The involvement of citizens is a key issue for smart city initiatives, said José Ramón Martín-Sanz García, energy efficiency engineer at Veolia, a partner in a Spanish project near Valladolid.

“One of the biggest challenges was convincing homeowners that it was necessary. It required a communication plan,” he said. About 31 buildings, a total of 1,488 dwellings with more than 4,000 residents, have been retrofitted since 2014 to decrease buildings’ energy demands by 40 percent.

Also in Spain, San Sebastian is in the final stages of installing a power plant that will heat 1,500 new homes. The construction falls under the umbrella of the European research initiative Project Replicate, which seeks to reduce primary energy consumption by 35 percent through a biomass-fueled district heating system. It will be finalized by this summer.

“This is the first project of its kind,” said Ainara Amundarain, smart strategy and sector specialization technician for the city of San Sebastian. “Most of the buildings in the district heating area are being built in tandem with the district heating project, so retrofitting is not an issue.”

However, 154 buildings already standing in the zone will have to accommodate the new technology. “They’re quite old, from the 1960s, so what we are also doing is retrofitting these old buildings,” she said. In the event of a longer or colder winter, the city has back-up measures in the form of gas boilers.

While many district heating schemes are quite large-scale, others can be much smaller, using waste heat from one building to heat another nearby. The strategy is that heat will be supplied from local sources of waste heat such as retail outlets, buildings and IT server rooms, as well as from renewable sources such as solar power and heat pumps—and often in combination with thermal storage.

“The results from our modeling studies demonstrate that by installing a low-temperature district heating grid, it is possible to reduce heat losses by a third,” explained SINTEF researcher Hanne Kauko.

She said the term “district heating” is really rather misleading. “In these local heating grids, the sources of heat are in fact very close at hand, so in Norway the sector is introducing a new term for such systems—urban energy.”

A low-temperature heat distribution grid linked to heat pumps or electric boilers, combined with thermal storage, will also facilitate electricity storage in the form of heat during periods of electricity overproduction from renewable sources.

“Today, heat is distributed in urban energy grids at temperatures of about 100°C, but modern buildings simply don’t require heat to be supplied at temperatures as high as this.”