At a deserted factory outside Bangkok, skyscrapers made from vast blocks of crushed printers, Xbox components and TVs tower over black rivers of smashed-up computer screens.

This is a tiny fraction of the estimated 50m tonnes of electronic waste created just in the EU every year, a tide of toxic rubbish that is flooding into south-east Asia from the EU, US and Japan. 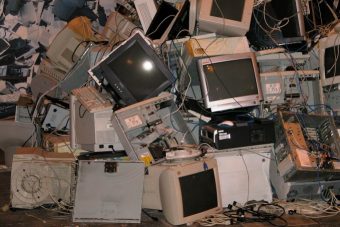 Thailand, with its lax environmental laws, has become a dumping ground for this e-waste over the past six months, but authorities are clamping down, fearful that the country will become the “rubbish dump of the world”. The global implications could be enormous.

A factory visited by the Guardian in Samut Prakan province, south of Bangkok, which was recently shut down in a raid for operating illegally, illustrated the mammoth scale of the problem. Printers made by Dell and HP, Daewoo TVs and Apple computer drives were stacked sky-high next to precarious piles of compressed keyboards, routers and copy machines. Labels showed the waste had mainly come from abroad.

For locals, it is unclear why Thailand should be taking this waste. The Samut Prakan factory sits in the middle of hundreds of shrimp farms and there were concerns it was poisoning the landscape, with no environmental protections or oversight in place.

Paraton Gumkum, 32, who owns a nearby shrimp farm, described the smell that enveloped the area when the factory was operating. “I wish that Thailand would say no to the e-waste trash. I am worried because it contaminates the air and the water with dangerous chemicals,” he said. “We have been very worried that the chemicals will leak into our shrimp farm.”

Until the beginning of this year, China was a willing recipient of the world’s electronic waste, which it recycled in vast factories. According to the UN, 70% of all electronic waste was ending up in China.

But in January, having calculated that the environmental impact far outweighed the short-term profit, China closed its gates to virtually all foreign rubbish. It has prompted something of a global crisis, not just for e-waste but plastic waste as well.

Asian nations such as Thailand, Laos and Cambodia stepped in. Chinese businessmen have set about attempting to open about 100 plastic and e-waste recycling plants across Thailand since January.

However, after five months in which e-waste imports have increased to 37,000 tonnes so far this year (more is thought to have entered illegally), Thailand has become the first south-east Asian nation to follow China’s example and crack down on the legal and illegal e-waste coming in.

“We already have too much electronic waste here in Thailand. It is not our burden to bring this pollution from the rest of the world to the next generation of Thai people,” said Thailand’s deputy police chief, Wirachai Songmetta.

Songmetta, who has led raids on more than 26 illegal e-waste factories in recent weeks, described some of the recycling set-ups as “frightening”, with primitive and contaminating methods used to extract valuable metals from the electronics while the rest is thrown into vast incinerators that pump out toxic smoke.

“These factories have been polluting the environment because of all the heavy metals in the e-waste like lead and copper, which can poison the soil and the water,” he said. “They also burn the plastic, which brings toxic fumes into the air. So it is very dangerous for the Thai people living near these factories.”

While the word recycling implies doing good for the planet, in fact most of the e-waste recycling plants involve a dirty and toxic process to extract lead and copper that does huge amounts of environmental damage. The plastic in e-waste, such as computer screen casings, also contains high amounts of flame retardants that are poisonous if burned or recycled into cheap food packaging, as is happening in some of the factories.

Thai customs officers are now pushing back 20 containers of e-waste a day that are landing in Thai ports, and in the next two months the government plans to pass legislation to bans foreign e-waste and plastic waste from entering Thailand.

But with countries such as the US and the UK already relying on south-east Asia to pick up the e-waste and plastic waste slack in the wake of China’s ban – in the past four months alone, UK exports of plastic to Thailand have risen fiftyfold – this presents a problem. In Hong Kong and Singapore, where most of the world’s e-waste is sent before it is bounced to less-developed countries, there is already a backlog of e-waste in shipping containers. If south-east Asian countries do not take it, it has nowhere to go.

Jim Puckett, of the Basel Action Network, which works globally to tackle the problem of toxic waste, said that in the short term a ban by Thailand would “inevitably lead to countries resorting to perverse ways to get rid of their e-waste, probably dumping it in terrible places and incinerating it all.” But he emphasised that in the long term a ban on e-waste imports across the region was “extremely necessary”.

“Places like America and Europe need to realise they are going to have to start recycling their own electronic waste and stop sweeping the negative effects from north to south,” he said.

“If a crisis does hit, hopefully this will make these countries think hard about how to be cleaner and more efficient about this waste we are producing on such an enormous scale, and finally take some responsibility.”