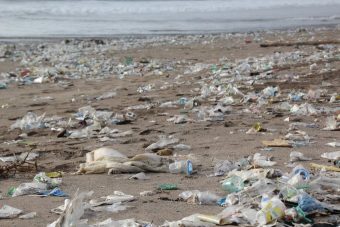 A group of businesses led by the NGO Lonely Whale yesterday revealed plans to build the first commercial-scale ocean-friendly plastic supply chain, in the latest sign of the growing momentum behind efforts to tackle plastic waste.

Supported by UN Environment, the NextWave initiative brings together global corporates including Dell, General Motors, Trek Bicycle, Herman Miller, Interface, Van de Sant, Humanscale and Bureo to try and scale the use of ocean plastics in their products.

The issue has caught the public’s imagination in recent months, in part due to the BBC’s popular Blue Planet documentary series presented by Sir David Attenborough, which exposed the devastating impact ocean plastics are having on marine wildlife.

Erik Solheim, UN Environment’s executive director said oceans are facing a “plastic pandemic”. “It is critical for companies to take ownership of their supply chains and for consumers be aware of how their everyday choices can have a lasting legacy,” he said. “We welcome Dell and Lonely Whale for organising this working group and spearheading what we hope will be a catalyst to innovation that can only be achieved by working together.”

Members will share development of a sustainable supply chain model that reduces ocean plastics pollution at scale, while creating an “economic and social benefit for multiple stakeholders”.

NextWave hopes the project could divert more than three million pounds of plastics from oceans within five years, the equivalent of keeping 66 million plastic water bottles from washing out to sea.

Members have also agreed to test the integration of ocean-bound plastics into products or packaging, and to reduce plastics use across their operations.

The group said it was “critical to ensure each company assesses its own plastic footprint and eliminate and/or significantly reduce its own use of single-use and non-recyclable plastics”.

The aim is to develop the first-ever commercial-scale ocean-bound plastics supply chain which meets chain-of-custody compliance, and also complies with external, third party verification of its environmental impact, according to the group.

John Bradburn, global manager of waste reduction at General Motors, said joining NextWave was part of the firm’s ongoing efforts to reduce its plastic waste. “Advancing the circular economy requires us to see items not as what they are, but what they can become,” he said. “When we work together, cross-industry with small and large companies alike, we unlock even more value from these resources and multiply the positive impact.”

Additional supporting members of the group include 5Gyres Institute, the Zoological Society of London and the New Materials Institute.