One-sixth of the carbon footprint of the average diet in the European Union can be directly linked to deforestation in tropical countries, according to a new study from researchers at Chalmers University of Technology, Sweden. 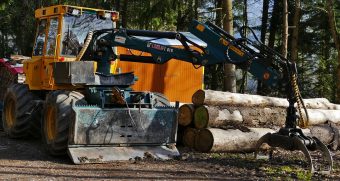 The study, due to be published in the May 2019 edition of the journal Global Environmental Change, traces carbon emissions from tropical deforestation through global supply chains to consumer countries.

“In effect, you could say that the EU imports large amounts of deforestation every year,” Martin Persson, one of the study’s researchers, said in a press release on the university’s website. “If the EU really wants to achieve its climate goals, it must set harder environmental demands on those who export food to the EU.”

The researchers estimated that 2.6 billion tonnes of carbon dioxide were emitted annually between 2010 and 2014 due to deforestation associated with expanding croplands, pastures and forestry plantations in the tropics (including peatland drained for agricultural production). More than half of those emissions can be accounted for by cattle ranching and oilseed cultivation.

The relationship between high consumer demand in Europe, a major importer, and tropical deforestation is coming under increasing scrutiny. France recently stated its commitment to stopping “deforestation imports” by 2030, while, separately, investors warned soy giants of a backlash over their deforestation practices.

Despite this, Persson is not convinced that enough is being done. He cited Global Canopy’s recent Forest 500 report, which, he said, showed there are few signs that major companies will be able to live up to their zero-deforestation pledges, as implementation has fallen short of expectations. “I think much the same can be said about government action in importing countries,” Persson told Mongabay. “There are [as] yet no clear signs that they intend to take firm action … moving beyond voluntary to regulatory actions, as has been done when it comes to timber imports.” Support could also be provided, he suggested, to help smallholder farmers practise sustainable intensification.”

The EU’s initiative on Stepping up EU Action against Deforestation and Forest Degradation — which recognizes that the bloc, “as a major importer of agricultural and forest commodities, is part of the problem but can also be part of the solution” — is due to be adopted and published in the second quarter of 2019, according to Anne Delvaux of the European Commission’s Directorate-General for Environment.

Asked whether the plan will include any legal requirements for stakeholders, Delvaux said: “We cannot say at this stage”.

The new study was based on information from a paper published in March, also produced by researchers from the Department of Space, Earth and Environment at Chalmers University of Technology, in collaboration with colleagues from the Stockholm Environment Institute and Germany’s Senckenberg Biodiversity and Climate Research Centre.

The original study draws on existing data to quantify the deforestation caused by agricultural and forestry production in the tropics and subtropics, and then uses international trade models to map where these exported commodities are apparently consumed.

It found that crops, including palm oil, soybeans and tree nuts, accounted for 40 percent of deforestation attributed to exports (beef represented just 11 percent). Many of those crops come from Indonesia, Brazil and Argentina, which together are accountable for nearly half (44 percent) of deforestation embodied in crop production, of which they export between 49 and 76 percent.

“We can see that more than half of deforestation is due to production of food and animal feed, such as beef, soy beans and palm oil,” said Florence Pendrill, another of the study’s researchers, in the university press release.

The study divides countries into pre-, early-, late- and post-forest transition, referring to the journey to expanding forest cover. It found that from 2005 to 2013, 87 percent of deforestation that could be attributed to international demand was exported to countries that “exhibit decreasing deforestation rates or increasing forest cover,” particularly in Europe and Asia (notably China, India and Russia).

In fact, the study found that one-third of net forest gains in post-forest transition countries were offset by imports of commodities causing deforestation elsewhere. In the United Kingdom, for example, there was an annual increase of 170 square kilometers (66 square miles) of forests between 2010 and 2013 — but the country also imported 310 square kilometers (120 square miles) per year of embodied deforestation.

While domestic consumption is undeniably a key driver of deforestation — the study notes that Brazil and Indonesia accounted for 44 percent of the deforestation attributed to expanding cropland, pastures and tree plantations — looking at the problem from a global perspective is vital.

In the abstract to the study, its authors note that with international trade in forest-risk commodities on the rise, “it is becoming increasingly important to consider between-country trade linkages in assessing the drivers of — and possible connections between — forest loss and gain across countries.”

One challenge they researchers faced in their research was the lack of pan-tropical data on which crops that are displacing forests. “We had to take a more indirect approach, linking forest loss to increases in cropland, pasture and forest plantation areas from national statistics,” Persson told Mongabay. Figuring out which commodities were expanding was not always straightforward though, as sometimes one commodity expanded into another, pushing that commodity into the forest. In order to minimize this problem, they carried out the analysis at a sub-national level for Brazil and Indonesia – the two countries accounting for the bulk of tropical forest loss.

However, there have been rapid advances in the last few years in terms of mapping forest loss and its drivers using remotely sensed data. So, looking forward, the researchers hope to re-explore the supply chains linking consumers to tropical forest destruction in greater detail – and also to expand the analysis to look at a broader set of impacts, such a biodiversity loss. “We hope that this work can help inform different actors – both public and private – in their efforts to reduce their impacts on deforestation,” said Persson.