Automation may have caused a significant surplus of dairy products and a corresponding price drop, but one non-profit has stepped up to ensure food – and farms – don’t go to waste. Philabundance, a food bank in Philadelphia, is working with cow ranchers to help sell their foods while also keeping hungry families fed in the city. 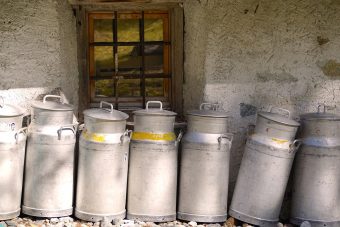 After shifting their farming focus away from traditional milk packaging and sales, Pennsylvania’s dairy farmers struggled to keep family businesses afloat. According to a study by the Center for Dairy Excellence, 120 Pennsylvania dairy farms closed their gates for good in 2016.

That’s where Philabundance came into the picture. Working with farmers across the state, the organization wanted to purchase excess dairy products to feed hungry families in Philadelphia. Traditionally, extra skim milk was dumped because farms didn’t have the equipment to turn the surplus into cheese or yogurt. In 2016, farmers across the United States discarded 43 million gallons of excess milk.

But with state funds provided by the Pennsylvania Agricultural Surplus System and the cooperation of dairy farms, Philabundance and other food banks purchased over 60,000 gallons of excess milk destined for waste and turned it into cheese. The result was a new food source for food banks and $165,000 in revenue for farmers.

This partnership quickly turned into a much bigger idea: turning excess milk into artisan cheese. Philabundance took the lead by buying even more milk to produce the same food products, then selling them under the name “Abundantly Good.” The products went on sale through three retail partners, a direct-to-restaurant seller and an online shop. One dollar from each sale goes back to farmers, subsidizing the milk set aside for food donations. In one year, farmers sold $9,000 worth of products each and prevented further food waste.

With the success of the cheese sales and donation programs, Philabundance is testing other products for retail shelves, including drinkable yogurt. The group is also expanding its line to include foods like spiced tomato jam. Much like the dairy program, portions of the sales go back to farmers who turn their crops into soup and sauces for people in need.

This partnership closes the loop in agricultural waste. Instead of destroying products or sending food waste to the garbage, farms produce more food that goes to people in need. In turn, the farms’ bottom lines increase, keeping them sustainable well into the future.

Which is something that everybody – from farm to table – can celebrate.