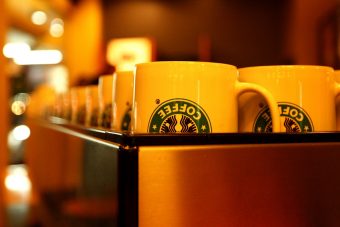 The organisations hope to tackle single-use plastic pollution with the one-month testing period, which will see Starbucks customers given the option to borrow a free reusable cup for their drink, that they can then drop off at a ‘Cup Check-In’ point before they board their flight.

Cups will be collected from these five points before being washed and returned to the cafe to be reused again.

This would remove the need for people having to use paper and plastic disposable versions – currently Gatwick Airport throws away seven million paper cups each year, around 1.7 million of which end up in landfill.

The campaign is funded by the voluntarily 5p charge that Starbucks has added to the cost of disposable cups.

Around 2,000 reusable cups will be put into circulation around the airport to help reduce the number of paper cups thrown away.

Hubbub and Starbucks say they will openly share the results from the trial once it has been completed.