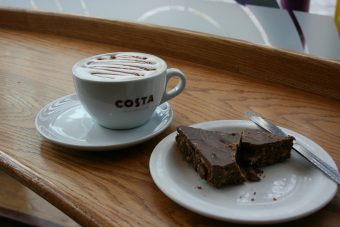 Costa has opened a giant £38m energy and resource-efficient coffee roastery in Essex, which it claims will be one of the most sustainable industrial buildings in the world.

The BREEAM ‘Outstanding’ accredited factory’s on-site renewable energy generation includes a 249kw solar PV system to provide power for the roastery, as well as a rainwater harvesting system designed to curb water use.

The building has a ‘zero energy’ shell, meaning it consumes less energy than it creates via its on-site renewable power – although this rating does not include the factory’s internal equipment, which is accredited separately, Costa said.

In addition, the company said it plans to operate a zero-waste-to-landfill policy for its roasting activities at the factory, while its internal equipment will also boast “a wide array of other sustainability features” drawing on lessons from its ‘Eco-Pod’ zero carbon coffee shop project in Telford.

The coffee chain said the new facility was a response to increasing global demand, adding that it would quadruple roasting capacity from 11,000 tonnes to 45,000 tonnes a year, while using more efficient processes that will boost its productivity by 25 per cent.

Covering more than 85,500 sq ft – the equivalent of over 30 tennis courts – the new roastery is the largest in Europe and will enable Costa to produce coffee for 2.1 billion cups a year, the firm said.

Construction of the building started in November 2015 with the site in Basildon chosen due to its proximity to Tilbury Docks where raw coffee beans are imported to the UK, halving the transport distance from docks to roastery compared to its old site in Lambeth, London.

The news follows both Costa’s tie-up with biomass specialists Bio-Bean to recycle more than 3,000 tonnes of waste coffee grounds from 850 of its stores into pellets for woodburning stoves and the recent launch of its new coffee cup recycling scheme at more than 2,000 of its UK outlets.

Dominic Paul, Costa’s managing director, said the factory had been carefully designed to improve efficiency and would include a coffee academy to help train 3,000 baristas per year.

“Costa is growing rapidly as a global business and our new roastery will provide the platform for sustained international expansion as we continue inspiring the world to love great coffee,” he said. “Today is about quality, capacity, investing in the future and being true to our heritage – it’s about embracing our traditions whilst continuing to innovate and drive global growth.”