Scientists have uncovered a new threat to the world’s endangered coral reefs. They have found that most are incapable of growing quickly enough to compensate for rising sea levels triggered by global warming. 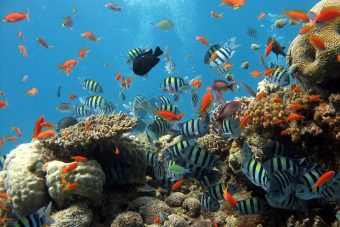 The study suggests that reefs – which are already suffering serious degradation because the world’s seas are warming and becoming more acidic – could also become overwhelmed by rising oceans.

The research – led by scientists at Exeter University and published in Nature this week – involved studying growth rates for more than 200 tropical western Atlantic and Indian Ocean reefs. It was found only 9% of these reefs had the ability to keep up with even the most optimistic rates of sea-level rises forecast by the Intergovernmental Panel on Climate Change. “For many reefs across the Caribbean and Indian Ocean regions, where the study focused, rates of growth are slowing due to coral reef degradation,” said Professor Chris Perry, of Exeter University. “Meanwhile, rates of sea-level rise are increasing – and our results suggest reefs will be unable to keep up. As a result, water depths above most reefs will increase rapidly through this century.”

Sea levels rose by several inches over the past century and measurements indicate the speed of this increase is now rising significantly. Two key factors are involved: climate change is making ocean water warmer and so it expands. And as ice sheets and glaciers melt, they increase amounts of water in the oceans.

At the same time, reefs are being weakened by ocean warming and also by ocean acidification, triggered as more and more the seas absorb more and more carbon dioxide. These effects lead to bleaching events that kill off vast stretches of coral and limits their ability to grow.

“Our predictions, even under the best case scenarios, suggest that by 2100 the inundation of reefs will expose coastal communities to significant threats of shoreline change,” said co-author Prof Peter Mumby of Queensland University.

This point was backed by US marine scientist Ilsa Kuffner writing in a separate comment piece for Nature. “The implications of the study are dire. Many island nations and territories are set to quickly lose crucial natural resources.”