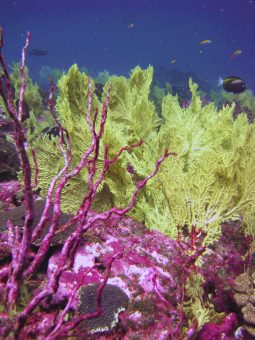 A global study has revealed exactly why corals glow during ocean heatwaves: to try and survive.

The research by the University of Southampton’s Coral Reef Laboratory shows that some corals exhibit a dazzling colourful display when they suffer bleaching due to warmer temperatures—to protect themselves.

The university’s scientists found that glowing colours in bleached corals act like a protective layer (similar to sunscreen) when symbiotic micro-algae are lost. The vivid colours are also a blinking neon sign that encourages the algae to return. The study suggests that corals develop extreme colouration within 2 to 3 weeks after exposure to mild or temporary heat stress.

Bleaching occurs when corals—tiny marine animals that secrete calcium carbonate for protection—become stressed by factors such as warm water or pollution. The stress causes them to expel the microscopic symbiotic algae called zooxanthellae, which reside within their tissues. The corals then turn ghostly white; they become ‘bleached.’ This video explains the process.

The zooxanthellae are the primary food source for corals. If the algae do not return to the corals as soon as possible (or if temperatures get warmer), corals are exposed to environmental stressors and can die. Within a few years, an entire coral reef can break down and much of the biodiversity that depends on its complex structure is lost, a threat to the world corals.

Professor Jörg Wiedenmann, head of the University of Southampton’s Coral Reef Laboratory explained: “If the coral cells can still carry out at least some of their normal functions, despite the environmental stress that caused bleaching, the increased internal light levels will boost production of colourful, photoprotective pigments. The resulting sunscreen layer will then promote the return of the symbiotic algae.”

Coral reefs, like underwater cities, support a quarter of all marine life, up to a million species. They provide at least half a billion people with food security and livelihoods; protect coastlines from damage by buffering shorelines against waves, storms and floods.

The researchers conducted a series of controlled laboratory experiments at the coral aquarium facility of the University of Southampton.

“Our research shows that colourful bleaching involves a self-regulating mechanism, a so-called optical feedback loop, which involves both partners of the symbiosis. In healthy corals, the photosynthetic pigments of the algae take much of the sunlight. When corals lose their algae, the excess light travels back and forth inside the animal tissue –reflected by the white coral skeleton. This increased internal light level is very stressful for the symbionts and may delay or even prevent their return after conditions come back to normal,” said Wiedenmann.

Bleached corals glow in luminescent colours—blue, yellow and purple—a phenomenon that has sparked the Glowing Gone Campaign in which UNEP has partnered with The Ocean Agency, among other leading ocean conservation organizations. The process was showcased through the Emmy-winning Netflix documentary Chasing Coral.

However, bleaching—explained Dr. Cecilia D’Angelo, an author of the study and Lecturer of Molecular Coral Biology at Southampton—is not always a death sentence for corals.

“If the stress event is mild enough, corals can re-establish the symbiosis with their algal partner. Unfortunately, recent episodes of global bleaching caused by unusually warm water have resulted in high coral mortality, leaving the world’s coral reefs struggling for survival.”