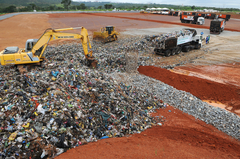 ISWA (The International Solid Waste Association), and ABRELPE (The Brazilian Association of Public Cleansing and Waste Management Companies) have taken their “closedumpsites” campaign to Brazil, home to some of the world’s largest and most dangerous dumpsites.

ISWA is campaigning to close the 50 biggest dumpsites in the world, a major source of pollution to the environment and a health threat to millions of people.

ISWA’s report “A Roadmap for Closing Waste Dumpsites”,  highlighted the Estrutural dumpsite in Brasilia, Brazil’s capital city, as one of the world’s largest and most threatening to human health.

The closure of the Estrutural dumpsite has given ISWA’s campaign its first success story. The report and the campaign was used to inspire the city of Brasilia to close down one of the largest dumpsites in Latin America and quite possibly the world.

Brasilia has hosted this huge open dump for more than 50 years and the regional government, supported by the conclusions of the ISWA report, took the decision to finally inaugurate an engineered sanitary landfill to replace the old dumpsite, which will be closed completely in 18 months.

“The governmental decision to inaugurate a Sanitary Landfill in Brasília is very important and represents the first step for the effective closure of the Estrutural dumpsite. Closing dumpsites is our main battle nowadays, because it is fundamental and the main solution for the improvement of the environment and health in any community, and a major contribution towards the implementation of the Sustainable Development Goals recently set by the UN”, says ISWA President Antonis Mavropoulos.