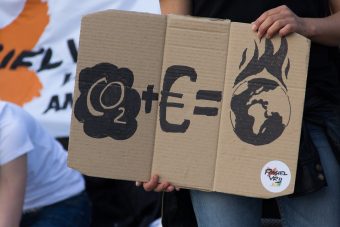 Pupils from around the UK went “on strike” on Friday as part of a global campaign for action on climate change.

Students around the country walked out of schools to call on the government to declare a climate emergency and take active steps to tackle the problem.

Organisers Youth Strike 4 Climate said protests took place in more than 60 towns and cities, with an estimated 15,000 taking part. They carried placards, some reading: “There is no planet B.” The action was part of a much wider global movement, known as Schools 4 Climate Action.

It began with 15-year-old Swede Greta Thunberg skipping class to sit outside government buildings in September, accusing her country of not following the Paris Climate Agreement. Since then, tens of thousands of children across Belgium, Germany, Sweden, Switzerland and Australia have been inspired to hold their own demonstrations.

The group, which helped coordinate the protests, has four key demands:

Greta tweeted about the UK protests, writing: “British PM says that the children on school strike are ‘wasting lesson time’. That may well be the case. But then again, political leaders have wasted 30 yrs of inaction. And that is slightly worse.”

A Downing Street spokeswoman said that, while it was important for young people to engage with issues like climate change, the disruption to planned lesson time was damaging for pupils.

The National Association of Head Teachers said it did not condone children missing school to take part in the action and that “nothing is more important than a child’s education”. It said “individual school leaders can decide how best to respond” to any protests involving its students.

However, energy minister Claire Perry said she was “incredibly proud” of young people’s passion and concern. She told the BBC: “I suspect if this was happening 40 years ago, I would be out there too.”

Labour leader Jeremy Corbyn said schoolchildren were “right to feel let down by the generation before them”, while Green Party MP Caroline Lucas said it was the “most hopeful thing that’s happened in years”.

She addressed campaigners in Brighton, saying they should be allowed to miss school because of “exceptional circumstances”. She said: “The time for talking is over, and time for action is now.”

Scarlet, 15, from Suffolk, is part of the UK Student Climate Network. She said: “We want the UK government to declare a climate emergency and make moves to achieve climate justice, prioritising this above all else. “We’re demanding the government listen to us and we will continue to make a noise until they do so. It can’t be about behaviour change any more; it has to be about system change.”

Many were keen to point out it is their generation who will be left to pick up the pieces of our civilisation’s waste and pollution.

They don’t feel the government is listening to scientists’ warnings on climate change. Without a vote, protests like this one are their only option, they say. Some climbed onto statues but were quickly ordered down by police.

The organisers had planned a revision session to show the protestors take their education seriously but instead, shortly after noon, some of the teenagers, sat down on a crossing, blocking traffic.

Again they moved on quickly, but took an unplanned walk up Whitehall. Most of the protesters left the square and marched to Downing Street.

The protest is good-humoured, but the organisers’ plans have been abandoned.

By about 13:30 only a noisy hardcore of a few hundred demonstrators remained, determined to cause maximum disruption to traffic outside the Palace of Westminster.

Small groups staged sit-down protests across junctions, surrounding buses, shouting “engines off” at drivers and climbing traffic lights. As police dispersed one group another would form. I saw one young man arrested for obstruction – but he said he was not a school student.

Hundreds of young protesters chanted for climate justice in Cambridge. One of them was 10-year-old Zachary, who attended with his mother. He said: “People just have to change their ways as we don’t want the world as it is right now. We just want to make people aware of it. We were talking about it in our class, so we just came along.”

A protest was held in Belfast, where students walked out of schools to attend a demonstration at the City Hall.

In Wales, hundreds of primary and secondary school pupils descended on the Welsh Assembly in Cardiff Bay.

Meanwhile in the Scottish Highlands, pupils staged hour-long walkouts outside their school gates.

First Minister Nicola Sturgeon backed youngsters taking part, saying it was a “cause for optimism in an often dark world”.

Another nationwide protest has been planned for 15 March.