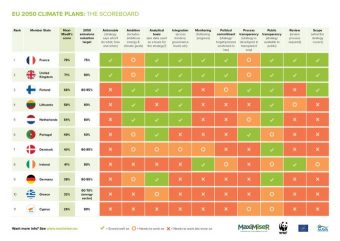 Only eleven EU Member States delivered a 2050 emissions reduction strategy by 2015 as required by EU law – and the strategies that were submitted vary hugely in quality. These are the findings of the EU LIFE-funded MaxiMiseR project from WWF’s European Policy Office.

France’s long-term strategy scored highest in the project’s rankings, with a top score of 78%, followed by the UK with 71%. France’s overall score was brought down by its low emissions reduction target of 75% by 2050. At the other end of the scale, Cyprus only scored 25%, partly because it only submitted a draft strategy.

“Strong decarbonisation strategies for 2050 and beyond are the backbone of EU climate action, so the fact that we are missing several key vertebrae is worrying”, commented Imke Lübbeke, Head of Climate and Energy at WWF European Policy Office.

“A good low emissions strategy should be in line with our Paris Agreement climate goals, enforceable, transparent and developed with business and civil society input. A few countries are getting it partly right, and some – for example Germany – have already produced updated plans which are a good deal stronger than the 2015 versions – but a lot more must be done to ensure others catch up!” she added.

“Clear guidance from the EU, good enforcement mechanisms and regular reviews would help Member States reduce emissions while ensuring the well being and prosperity of all European citizens.” Overall, countries which submitted strategies scored best on ‘public transparency’ – making data and documents publicly available. However, they scored poorly on including stakeholders in the preparation of strategies, having their strategies and/or long-term targets enshrined in law, giving enough detail of how the plan will be implemented.

Ensuring their strategies would be monitored and reviewed with a view to increasing ambition and making them stronger.

Results were mixed on how well strategies were integrated into broader economic, social and environmental objectives and how far they focused on the whole economy and included areas like land use, land use change and forestry (known as ‘LULUCF’).