The global climate crisis could lead to more renewable electricity being generated by spurring faster wind speeds for the world’s growing number of windfarms, according to research. 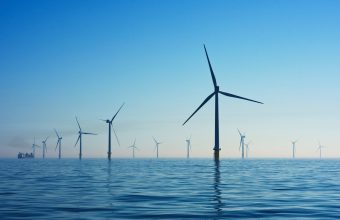 Scientists have discovered that the world’s shifting ocean circulation patterns may have triggered a rapid increase in wind speeds over the last 10 years.

The international research team analysed data from 9,000 international weather stations since the late 1970s and found that wind speeds had unexpectedly increased after a three-decade slowdown.

Dr Zhenzhong Zeng, a professor at Princeton University and the lead author of the report, said the research team was surprised by the findings after setting out to study the slowdown in global wind speeds.

The faster than expected wind speeds could help increase the amount of renewable electricity generated by each turbine by more than a third to 3.3m kilowatt hours (kWh) by 2024.

Zeng said the unexpected acceleration is likely to have played a bigger role in improving the efficiency of windfarms in the US than technological innovations.

The research paper, published in the peer-reviewed journal Nature Climate Change, suggests that faster global speeds may continue for at least another decade in what would be a major boost for windfarm owners.

Dr Adrian Chappell, a professor at Cardiff University and a co-author of the report, said the rapid increase in global wind speed bodes well for the expansion of renewable energy which will be central to keeping global heating to below 2C.

The findings mark a major reversal in a trend of decreasing wind speeds over the last three decades – known as global terrestrial stilling – which threatened to halve the world’s wind power potential by the end of the century.

Previous studies have found that increased “roughness” on the Earth’s surface, from new buildings and urbanisation, has acted as a buffer by slowing wind speeds by up to 2.3% every decade since the late 1970s. But the latest research has demonstrated that large-scale ocean and atmospheric circulation patterns could be making wind speeds faster again.

Zeng said that the effect of global heating on the world’s wind speeds remained largely uncertain because rising temperatures would have a diverse range of impacts that are not fully understood.

“We believe our study advances [the] understanding on how climate change affects wind, and we appeal for more scientists to focus on this important climate variable,” he said. “The study of wind can also shed light on the dynamic mechanisms of climate change.”