The climate crisis, drug use and feeding farmed fish with wild stocks risks “sinking” the $230bn (£180bn) aquaculture industry, according to an ethical investment network. 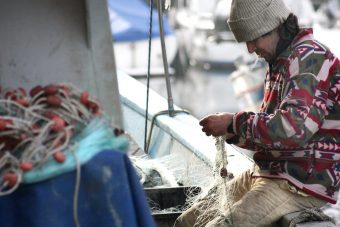 Fish farms now surpass wild fisheries as the main provider of seafood on our plates, but combined risks from global heating, excessive use of antibiotics, a dependence on wild stocks for feed, and poor governance threatens the lucrative and fast-growing sector, warned Farm Animal Investment Risk and Return (Fairr), a $12trn-backed network.

The aquaculture industry is the world’s fastest-growing food production sector but has recently been hit by governance scandals. In April, US seafood buyers filed a class lawsuit alleging price-fixing by Norwegian salmon producers, following spot raids on fish farms across Europe by European Commission anti-cartel investigators. And in May, a Panorama report named several fish farmers as among those under investigation by the Scottish Environment Protection Agency for alleged misreporting of chemical use.

Fairr’s report, Shallow returns?, shows an average growth in aquaculture of almost 6% annually, providing “significant” returns for shareholders, at up to more than 400% over five years. But the investor group warned that much of this expansion is based on high-density farming associated with environmental, social and governance risks. It accused the sector of “limited transparency” on these issues.

“Investors should be aware of the sustainability risks in the aquaculture sector before they wade in too deeply,” said Maria Lettini, director of Fairr. “From effluents to emissions, this sector must address significant environmental and public health challenges if it is to prosper over the long term.”

Aquaculture is both a significant contributor to emissions and is highly exposed to their impacts, the report said. Farmed marine fish production in south-east Asia, one of the largest aquaculture regions, is expected to drop 30% by 2050 due to rising sea temperatures and acidification of oceans.

Lettini said: “We thought that farmed fish would save our wild stocks in the oceans, but now it’s coming to the fore that we are using wild-caught fish to feed our farmed fish – and that is causing real problems.”

Nearly one fifth of global fisheries production is used for fishmeal and fish oil production, the report found.

Last month Norway suffered its worst algal bloom in 30 years, with 8 million salmon killed so far. Algal blooms caused an estimated $800m in damage to the Chilean salmon industry in 2016, killing nearly 27m fish, about 20% of the country’s annual production, according to the report.

Hotspots of antibiotic use in fish farming accelerate antimicrobial resistance, the report found, with some countries taking action against importers. In January this year, the US Food and Drug administration denied entry to 26 shipments of Indian shrimp, after detecting banned antibiotics.

Another major issue highlighted by the report was the issue of farmed fish slipping out of their pens and coming in contact with native populations.

Lettini said: “Farmed fish escape and mix with their organic peers and that is changing the gene pool of wild fish. Changes in DNA have been found and we don’t even know the importance of that yet.”

Fairr recommended good management practices, including the use of probiotics to reduce antibiotic use, and alternatives to fishmeal, including feed made from bacteria as well as greater cultivation of mussels and oysters, which do not require fishmeal-based feed.